In a  recent blog post, The Lean-Industrial Complex, I said: "Over time, the people with decades of hands-on practice in real-world settings would fall into the background, while the people who merely studied TPS [Toyota Production System] emerged as the arbiters of Lean thought and Lean practice. … END_OF_DOCUMENT_TOKEN_TO_BE_REPLACED 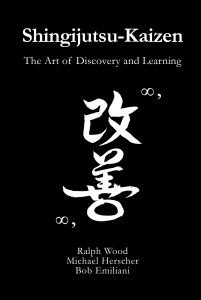 This is the back story to the book Shingijutsu-Kaizen. In 2007 or 2008, a book project was initiated to write about the method used by sensei from Shingijutsu USA Corporation to teach kaizen. A manuscript was produced, but the project was abandoned. Several months after my work had commenced … END_OF_DOCUMENT_TOKEN_TO_BE_REPLACED

It is time to re-discover Kaizen and Kaizen Spirit, and renew confidence in our abilities and the future. I, along with my co-authors Ralph Wood and Michael Herscher, are extremely proud to bring to you this very special new book: Shingijutsu-Kaizen: The Art of Discovery and Learning. It is a book … END_OF_DOCUMENT_TOKEN_TO_BE_REPLACED

In the early days, late 1970s to late 1980s, there existed just a few small organizations to help people learn about and implement Toyota's production system (TPS). They were led by people with decades of hand-on practice at Toyota and its affiliated companies. Some organizations, however, were led … END_OF_DOCUMENT_TOKEN_TO_BE_REPLACED