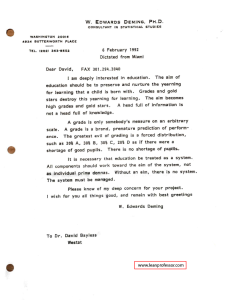 Top leaders of higher education institutions inevitably hope leave a legacy. Presidents who began their tenure in the late 1980s or thereafter presided over an era of uncontrolled costs, large increases in expensive administrative and other overhead positions, new buildings and facilities construction, and annual tuition increases at double the rate of inflation. This is their legacy, for which they should be ashamed of. It is an era of herd mentality and lost opportunities. There is little to be proud of.

To my knowledge, no top leader in this 30-year time period led efforts to dramatically improve teaching and learning. Instead, they operated under the assumption that teaching was very good – performed by professionals, informed by years of exposure to many different teaching methods as students and then later in deploying their own teaching methods on-the-job. The common view that a terminal degree qualifies one to teach is deeply flawed, as many of us know. Yet, this view prevails despite the continued existence of scores of teaching errors (defects) that limit student success.

Guided by chief financial officers, whose understanding of cost is limited to numbers on a spreadsheet, presidents saw the primary way forward was to increase prices and enrollments. That led to a competition among institutions to improve campus physical appearance and attractiveness to students, while at the same time reducing instructional resources.

The lack of legacy related to improving teaching suggests that the vast majority of presidents felt that such change was unnecessary or could not be made even if they did see the need for it. Why didn’t they see this? For those who did, what were they afraid of: faculty, leading, undertaking a challenge, or being different? They preferred instead to focus on things that were within their direct control, such as raising money and meeting with architects to plan and construct new buildings. This was a losing strategy because nearly every president could, and did, copy it. It was too easy to do. The lack of courage and perseverance by a succession of presidents has resulted in a huge strategic error at most institutions.

Presidents worked on what was easiest, not what was most important. As a result, there is little that distinguishes one institution from another. Distinctiveness, particularly in the quality of teaching and learning, was not seen as a winning strategy. Said another way, they did not do the right thing: lower costs, improve teaching, and make students and payers happy. My former Japanese kaizen sensei would scold a president and say something like this: “How could mismanage like this! You have ruined young people’s lives. You must apologize to students and make sincere efforts to quickly correct this situation.”

We should be under no illusion that presidents actually care about “student success.” The talk is ever-present, but the action is nil. Their attitude is the same as the hard-line faculty who fail many students – “Hey, some students are just not going to make it through” – yet they proffer positive marketing messages that resonate parents, employers, and politicians.

The lack of cost control created financial problems for students and payers. The university prospered, yet students did not. Students’ financial situation deteriorated over time due to ever-higher tuition prices and burdensome student loans. Are students likely to return to their Alma Mater to further their education? Some yes, but most no because they cannot be happy about their outstanding student loans and are likely unwilling to incur further debt. Instead of enjoying repeat customers obtained for near-zero marketing cost, they must now spend money to make money (often at large discounts).

Ultimately, the buildings-as-my-legacy strategy is something presidents should be ashamed of. That, plus ever-higher tuition prices, did not improve the image of higher education. Instead, the image, as well as substance of higher education has deteriorated over time. So much so, that a 3-month crash course on software coding is now seen as superior to a 4-year undergraduate degree.

Past, current, and future presidents need to recognize this failed strategy and admit the great trouble that they caused students and payers. They must turn to improving both administrative and academic processes to reduce costs. They should avoid chasing higher enrollments and instead make better products – courses and degrees – by improving academic processes. The outcome of improved processes will be higher enrollments. The university and students (and payers) must prosper together, not one at the expense of another as has long been the case.

Here is a book that today’s higher education leaders should read and put into practice.