A trend has recently emerged among higher education policy-influencers and policy makers that is succinctly captured by the phrase: “If the student hasn’t learned, then the teacher hasn’t taught.” The failure of students to learn is the teacher’s fault, so blame the teachers for this problem. It is a very simple cause-and-effect recognizable by any educated person. Right?

That view, in the context of Lean, does not make any sense. In addition, it is inconsistent with the “Respect for People” principle. Formal root cause analysis would quickly reveal numerous causes for the observed effect – many of which will be of greater significance than how teachers teach. Blaming people does not contribute to problem-solving and is a dumb thing to do because it immediately drives teachers into defensive routines.

The correct view is that nearly every teacher is trying to do a good job, but there are many problems with teaching (as well as administrative and evaluation) processes. Process must, therefore, be improved, and teachers, as well as other stakeholders, have to be part of process improvement efforts. However, teachers will become engaged in improvement only if the process for improving is non-blaming and non-judgmental.

Further, the statement “If the student hasn’t learned, then the teacher hasn’t taught” can easily be shown to be false by applying critical thinking (click on image or view slides): 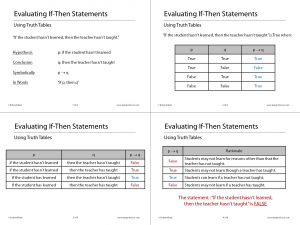 Blaming teachers for students’ failure to learn is illogical, and therefore a flawed argument. Yet higher education policy-influencers and policy makers have become absorbed in group-think and have failed to apply the critical thinking skills they learned as undergraduates.

Blaming teachers is effective because it is a simple solution to a complex problem. The outgroup, teachers (expensive human labor), is marginalized and the new ingroup, learning technology entrepreneurs, is favored merely by promises of better outcomes and lower cost. The effectiveness of the argument is greatly strengthened by the use of other forms of illogical thinking:

Decision-making traps are also put into play in order to further strengthen the argument that teachers are to blame for student’s failure to learn:

Multiple forms of illogical thinking and decision-making traps used together have created a confusing and complex (invalid) argument that clear-thinking teachers find difficult to penetrate – especially given that most other people assume that higher education policy-influencers and policy makers correctly understand the problem and know precisely what they are talking about. They don’t.

Its is remarkable to witness the many errors made by “educated” policy-influencers and policy makers – often driven by ulterior motives, or ego or bullying behaviors. Their failure to think critically, to think logically, and avoid common decision-making traps suggests that they too did not learn. By their logic, we must blame their long-retired, slacker teachers as well today’s teachers.

There is no doubt that learning how to think critically, to think logically, and avoid common decision-making traps should be areas of intense focus by all teachers in higher education (and K-12 as well). This should be easy to do because every discipline can cite many examples of an absence of critical thinking, the use of illogical thinking, faulty decision-making, and the damage done as a result of these. Both repetition and practical examples of relevancy will be required.

While this will not help us at the present time, it will help future policy-influencers and policy makers, whether in higher education or elsewhere, to better understand problems and identify practical countermeasures that are far more effective than blaming people. Let’s hope they apply what they learned in school to their work.

In Part 2 if this blog post, I will identify some of the reasons why the student hasn’t learned.