One problem that has long been a concern is how to turn managers into effective coaches when they have little or no practical experience with kaizen and have never personally engaged in basics such as set-up reduction, visual controls, creating a flowline or kanban system, etc.? This is in addition to the constraint we face where most managers (especially senior managers) have no interest or desire to engage in kaizen, or they see kaizen as something that only low-level employees do.

Take a sports example: It is almost impossible to be a coach and coach effectively if one was never been a player. About the only way you can come close is if you spent a lot of time listening to people who played and who coached the game for many years. The question then arises: Who should managers (and others) listen to when it comes to TPS/Lean? A coach who played the game for many years, or an analyst (someone who interprets the work of the originators)? 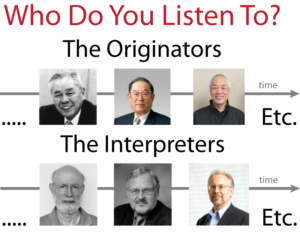 I have long felt that people have listened too intently to the analysts who have not actually “played the game” – the interpreters of Toyota’s management system, not the people who actually created it. I think that it is easy for all to agree that someone who actually created something is a much better guide than someone who studied it second-hand. That is not to say that interpretations are not helpful. Good interpretations can be extremely helpful and illuminate many fine points. But, more often than not, interpretations are lacking. Important features are misinterpreted, under- or over-emphasized, or left out, because, not having “played the game,” they are not aware of what is truly important.

If you have never been personally responsible for manufacturing or service operations, then your interpretation is surely handicapped. The handicap may be large or small, but the interpretation is handicapped nonetheless. It is difficult work and easy to make mistakes, in part because there is a big difference between being there and one who interprets the results much later in time. I know this from first-hand experience in my interpretation of Frank George Woollard‘s work, despite my manufacturing experience. For example, U.K. English is not the same as U.S. English, and the thinking, resources, and circumstances in 1920s England were different than the thinking, resources, and circumstances in 1920s America or 1930s Japan. Remarkably, generations of American management scholars and Lean management experts have had great difficulty accurately interpreting Frederick Winslow Taylor’s work in Philadelphia (and it continues to this day). So, you can image that English-speaking people would have even greater difficulty accurately interpreting Taiichi Ohno’s unique and difficult-to-understand work. I have documented some of the interpretation problems in this blog (click here, here, and here) and elsewhere.

It can be basic things such as under-emphasizing kaizen or not recognizing kaizen as the method that created TPS. Or, the short time-scale associated with continuous improvement, which is almost always left out of interpretations of Toyota’s production system. It can be more complicated, such as the technical aspects of kanban systems. Or, it can be the more complicated human aspects associated with the “Respect for People” principle. In other words, it is far more likely that important nuances and details will be left out by interpreters than by originators. The originators know the subtleties, such as the things that cannot be measured, but which can be improved. They also know about the many positive knock-on effects as they relate to people, the costs of doing business, society, etc., as well as the many pitfalls – great and small – to avoid

For example, when Taiichi Ohno says “…kanban [was] the tool that that kept us from failure and misjudgment.” (p. 52), what does he mean? Do we understand the importance of this? No. So we need to think deeply about it because I have never heard an interpretation of this. You won’t hear it from any of the analysts. Nor will you hear it from me. But, you might hear it from Chihiro Nakao – if you ask the right way.

I have never sought to interpret TPS because it is far too difficult (I’ll admit it; who else will?), many analysts have tried to do it (all unsuccessfully), and it was never my strongest area of interest. Instead, I focused on Lean leadership and the “Respect for People” principle, as well as Lean transformation process failure analysis (both mindset and methods). I have had valuable industry experience with kaizen, having learned many of the fundamentals well from Shingijutsu, and practiced it continuously for over two decades. In addition to the practical kaizen experiences, part of my ability to be an effective coach is the result of having spent far more time listening to the originators than to the interpreters.

I truly believe that the people striving to advance progressive management in their organizations should listen to the originators first, followed by the interpreters. This view is consistent with what I have always done in my own research and what have always told my students when they engage in research: “Find and study the original sources of information. That way you will know if the interpretations are accurate or not, what’s missing, etc.” (click here for example). I say this to you first and foremost as a professor who wants to help people learn, succeed, and prosper.

It is never too late to listen to the originators. Make them your focus for the next few years.