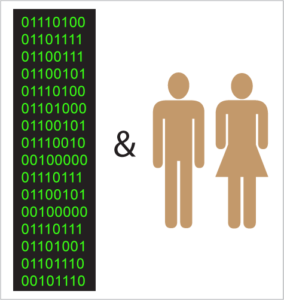 Taiichi Ohno lived in a time that spanned the analog-to-digital era. Ohno knew that change was inevitable and that TPS could adapt to a future in which computers played a more prominent role in business processes. He thought that the Toyota production system and computer information systems could work together in harmony. In his book Toyota Production System (1988), Ohno said (p. xv):

“The Toyota production system, however, is not just a production system. I am confident it will reveal its strength as a management system adapted to today’s era of global markets and high-level computerized information systems.”

However, Ohno was wary of the potential for people to become subservient to machines, when instead machines should serve people’s needs.  In the section, “Provide Necessary Information When Needed” (page 47), he said:

“While we intend humans to control them, computers have become so speedy that now it looks as if humans are controlled by the machine. Is it really economical to provide more information than we need – more quickly than we need it?”

“We use the computer freely, as a tool, and try not to be pushed around by it. But we reject the dehumanization caused by computers and the way they can lead to higher costs… we want information only when we need it… An industrial mind must be very realistic – and realism is what the Toyota production system is based on.”

Are CEOs quest for digital transformation based on realism, or it is based on the hope that technology will outperform employees? I’m sure it is the latter.

Ohno’s vision of the complimentary nature of human information system (TPS) and computer information systems is expressed more fully in the book Just-In-Time for Today and Tomorrow (1988). You should read it because it is an indispensable guide for combining digital transformation and Lean transformation. Kaizen, no doubt, will be a great help in that process.

There is a tremendously important aspect of the human information system that people don’t think about, and which is directly related to both “Continuous Improvement” and “Respect for People.” It is the ways in which management can quickly and easily trash the human information system that companies will always need and must rely upon, even after digital transformation becomes ubiquitous. In REAL LEAN: Learning the Craft of Lean Management (Volume Four, 2008), I wrote a chapter titled, “The Other Information System.” In it, I said (pp. 68-69):

Senior managers are the leaders of an organization. What they do as leaders is normally described in terms of generalized skills and personality characteristics, which are inputs. However, let’s describe leadership differently in terms of outputs: information flow. That is, a key role of leadership is to be enablers of human information system flow, and not to constrict, distort, or block information flows.

Describing leadership in terms of information flow re-contextualizes leadership; how they must think, how they must behave, and what they must know and do. This will help clarify their role and provide clearer direction and specific, practical actions they must take. This proves to be much easier to do than trying to emulate hard-to-define personality characteristics such as charisma.

How do executives do this? One way is to introduce a virus, which is a leadership behavior that can copy itself and infect other persons without their knowledge. Examples of viruses that infect human information systems include: distrust, blame, arrogance, selfishness, and bullying. Leaders who exhibit these behaviors, which create no value for any customer, corrupt or modify other people’s behaviors. They become like their boss, warts and all.”

This is a snapshot of what has been the focus of my work for about a decade: To re-define the role of leaders in terms of critically important outputs such as information flow, rather than inputs such as behaviors.