When I worked as a supply chain manager in the mid-1990s, I faced tremendous pressure from company leaders to offshore large chunks of the $106 million in annual spend of the work supplied to us by some 50-plus first-tier manufacturers located in the Connecticut river valley. I resisted that pressure and, in the end, it cost me my job. Though, for reasons too numerous to present here, resisting management’s pressure proved to be the right decision for the company and its customers. Since that time, I have closely followed the closing of factories and offshoring of work by several dozen large U.S. corporations.

The leaders of those corporations, and their chief financial officers, offshored the work because they thought they had a labor cost problem, when, in fact, they had manufacturing process problems. In particular, large batches of material coupled with long queue times, though the actual processing times were very short. Had the leaders corrected the twin problems of large batch sizes and long queue times, which could have been done relatively quickly, there would have been far less offshoring of work.

But they chose not to correct these basic manufacturing process problems, for which they were responsible, using methods which have been known about for decades. Instead, they decided to pursue lower labor wages in developing countries, where most suppliers installed the same manufacturing processes with the same large batch size and long queue time problems. Despite recent re-shoring of a small amount of manufacturing work, offshoring work continues today, albeit more quietly to due political pressure.

Concurrently, goods such as textiles were imported from low wage countries that killed off nearly all of the ordinary and most of the specialized textile industry in the United States. The year-over-year increase in the rate of textile imports was astounding; some 15 to 20 percent annually. This high-rate of importing goods of a wide range of goods led to hundreds of domestic plant closings and mass layoffs. The Federal government, was indifferent to industry’s drive to offshore work and import goods, and it ignored the effect these actions had on small businesses, communities, employees, families, upward mobility, and tax revenues. Externalization of costs due to offshoring work was something to be ignored; something that neither government nor corporate executives should be concerned about.

I read about this tragedy every day, with teary eyes, in business periodicals for more than 20 years. What U.S. corporations did to their workers was morally wrong because managers did not bother to learn new ways to correct basic manufacturing problems and did not work with employees improve the processes. It was also disgustingly unpatriotic. This has now alienated workers from their employers at a time when both management and workers must come together as a unified team to meet the big challenges of the future.

The quest to obtain lowest unit cost continues, while managers persistently fail to understand how to obtain the lowest total cost to the business (and society). The executive mindset on how to succeed in business was, and still is, stuck in the past, anchored by the ideas of economists that were created in bygone eras. The social and political consequences were thought to be nil. As we now know, that was a major misunderstanding of the consequences of high-rate offshoring and importing.

I understood the business problems. And I also understood the human toll – stagnant or declining wages, drug abuse, divorces, suicides, abandoned towns, and decaying infrastructure, and so on. Yet the economists, en-masse, believed the actions taken by large corporations to be both good and right. Habitual loyalty to the economic thinking of an obsolete past influenced them more than the evidence that one could read about every day in The Wall Street Journal.

Unfortunately, economic data lags current reality. It took 15 or more years for today’s economists to believe the trends that the data revealed. By the time economists figured out what was happening, it was far too late. All that economists could do is report, ex post facto, that offshoring work to lower wage countries had much greater negative impacts on employment, wages, balance of trade, upward mobility, intellectual property, etc., than they had anticipated. Importantly, they ignored the rate of offshoring. One can safely use the word “never” when saying: “An economist never pays a price for being wrong” Everyone else will pay the price. 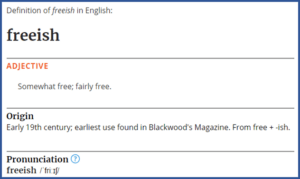 Free trade has long been an unreachable Holy Grail. Ideological commitment requires economists, politicians, and businesspersons to repetitively accentuate and inflate all the upsides of free trade and instantly derogate all downsides. Blindly chasing free trade as both governments and corporations have done, in the absence of common sense understanding of cause-and-effect leads to terrible consequences. Based on what I have witnessed first-hand, I believe freeish trade is preferable to free trade. What is freeish trade? It is the offshoring or importing of goods to an annual maximum rate capped at five percent. That means, Federal government economic policy caps the growth rate of free trade for any given product or industry to five percent annually to give domestic companies the opportunity to compete and survive. Far from excluding foreign competition, it gives competitors a fair opportunity to sell in a large and desirable market – though not at a rate that would cause clear and immediate harm to domestic corporations.

The five percent cap gives domestic corporations the opportunity to survive in the interest the nation, national security, the state, social (vibrant middle class), economic, political, environmental, and other strategic and grounds relevant to its citizens. Will corporations take advantage of that opportunity? Who knows. They don’t have to. Sometimes, a company’s demise can be a profitable endeavor for both management and investors. Incompetent managers will fail to make use of the opportunities given to them. Hopefully, competent management teams will recognize the opportunity and take advantage of the five percent cap.

Economists like to say that the loss of manufacturing jobs is not a problem because workers will find employment in the growing service sector of the economy. They say, for example, that new Amazon warehouses will be great for the local economy. In fact, it will be only good for the economy, not great for the economy, because the wages are low compared to manufacturing. In addition, the build-out of warehouses reduces inventory turns nationally and assures the perpetuation of inventories some 20-40 percent higher than sales. The inability of companies to more closely match supply with demand results in waste and is a perpetual drag on the economy.

The freeish trade cap is a more intelligent solution to trade friction than tariffs, and it avoids childish tip-for-tat trade wars. Tariffs, however well-meaning, are a poor way to protect an industry, such as steel, and company employees. It does nothing to protect the supply chain necessary for the steel-maker to prosper. A freeish trade cap of five percent would protect entire supply chains, not just an industry. It would improve competitiveness and chances for long-term survival of the entire supply chain. The five percent freeish trade cap could be made the standard trade policy for all nations to prevent unbridled free trade and the resulting economic, social, and political frictions that inevitably lead to tragedy.

A freeish trade policy might not bring much manufacturing back to the U.S., but it helps avoid the mistakes of the past which have proven to be so costly in the present. In the future, technologically advanced white-collar jobs are likely to follow the same path as the blue-collar jobs. The quest for higher cognitive productivity, through AI, no doubt follows the quest for higher labor productivity through offshoring and automation. The 5 percent cap should apply to white-collar jobs as well.

And finally, because supply chains have been globalized, economists like to remind us that economic integration is now behind us and that there is no going back. Don’t be so sure. It may be necessary one day, perhaps soon, to dramatically shorten supply lines in order to reduce carbon dioxide emissions. And, Lean management is ideally suited for times when resources must be conserved and when externalized costs must be reduced or eliminated.