In the November 2013 issue of the Vanguard Newsletter, John Seddon, Managing Director of Vanguard Consulting Ltd., had this to say about me:

I’m going to Sweden this month to speak at their annual public-sector jamboree. It will be my third time. I’m speaking alongside a public-sector client that has made profound improvements in adult social care.

Every time I have been to the jamboree they have had an American lean guru spouting nonsense and this is no exception. This time it’s the guru who claims lean fails because it is what he calls ‘fake lean’ and his lean is the way to go! His ‘real lean’ starts with ‘respect for people’. I can imagine ‘respect for people’ events and tee-shirts (he sells tee shirts) while there is no change to the system conditions that drive misery and other forms of sub-optimisation. Only in America; the home of the terrible diseases.

What would you call a profound idea in this guru’s head? A tourist!

This tourist will be going on from Sweden to Norway, for their big annual lean event. They know lean isn’t working and they know I know why 😉

As a teacher, I see this as nothing more than a student who does not understand. As I researcher, I have long seen this perspective as an important problem that requires careful study to help students understand. John is representative of many, many people who do not understand the history or significance of the “Respect for People” principle in Lean management. So, I offer this critique of his perspective. 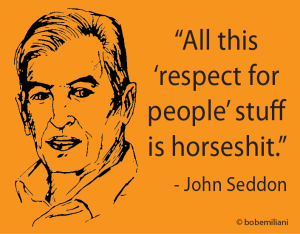 For nearly 20 years I have studied why leaders, including John, either ignore or fail to comprehend the “Respect for People” principle, despite the well-established historical requirement for its practice in progressive Lean management (both East and West). According to John, “intervention on people issues… is a popular red herring amongst western management thinkers.” In other words, one cannot intervene on people issues – certainly not via  the “Respect for People” principle, which is a fad manufactured by Americans because Lean “is failing everywhere” and to “make more money from junk.”

John crystallized why leaders ignore or fail to comprehend the “Respect for People” principle: they do not see it as something that results in a change to the system. Unfortunately, they fail to recognize that the pioneers of progressive management created the “Respect for People” principle for use as an intervention – a practical countermeasure for zero-sum (win-lose) continuous improvement (what I call “Fake Lean,” e.g. HMRC) – and found it to be highly effective when applied thoughtfully and consistently over time. The obvious can be difficult for many to see.

Further, John sees “Respect for People” as not relevant because “culture is a consequence of the system.” My research shows the reverse to be true, but no matter.

I’ve worked steadily for years to create new, practical ways to make the “Respect for People” principle a point of intervention. Then, building on my past research, I began a few years ago to think of leadership in terms of processes (a revolutionary idea; no more “art of leadership!”). I thought back to my own experiences as a leader in industry and asked myself: “What work did I do? What processes was I engaged in?” I discovered that most of my work centered around 15 leadership processes.

I wrote these findings in an  book  titled: Nobody is Exempt From Improvement (republished in 2015 as Speed Leadership). The book shows yet another way to make the “Respect for People” principle a point of intervention (notwithstanding John’s criticism of standardized work). The system is changed by improving leadership process through the elimination of leadership process errors, which reduces both process waste and behavioral waste (which John, I surmise, does not believe exists), as well as unevenness and unreasonableness.

Importantly, eliminating leadership process errors has a positive human consequence: better physical and mental health for workers and managers, and a workplace that is far more fun and interesting. Clearly, there is “change to the system conditions that drive misery and other forms of sub-optimisation.”

Nobody can rightly say that the “Respect for People” principle is not a point of intervention – either before my work or after. The future of Lean is bright as people begin to expand their comprehension of the “Respect for People” principle and focus on both the system and the people. It looks like it is time for John to update his Vanguard Method, once he absorbs these six new seminal moments: