Since the early 1900s, economists have believed in a concept called “economies of scale,” which means a savings of resources (money, material, equipment, space, energy, people, time, etc.) in production due to size. The image below shows an economies of scale cost curve, expressing the relationship between cost and volume, which has been very influential in guiding the thinking of business leaders for many decades. 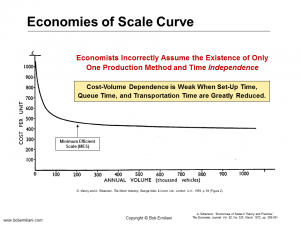 But a funny thing happens in economics once an idea is established: it is nearly impossible to kill. Economists assume their esteemed colleagues did good work, and the economies of scale curve, while overly simplistic, seems to makes intuitive sense. So the idea is accepted and thereafter taken as the undisputed truth, never to be questioned. Or, if questioned, results contradicting the accepted view will be immediately ignored – e.g. diseconomies of scale (meaning, they accept the upside [savings] and minimize or ignore downsides [total costs]). This does not happen in science or engineering, and it illustrates the odd nature of economics (and, relatedly, business, because economies of scale remains firmly rooted as a useful concept in management practice).

I have always found it incredible that economists see no reason to study Toyota’s production system. After all, a central focus of economist’s is the efficient use of resources in productive work, for both micro- and macroeconomies. Economists apparently view Toyota’s production system as nothing more than a minor tweak to batch-and-queue production, and therefore not worthy of investigation. What a huge mistake in judgment.

Fortunately, one economist took an interest in Toyota’s production system and blew a big hole in the economic lot size concept and re-drew the cost curve to better represent what is actually going on in relation to economies of scale. His name is Professor Eiji Ogawa. He did this pioneering work in the late 1970 and early 1980s while working in the Department of Economics at Nagoya University (located near Toyota’s headquarters). 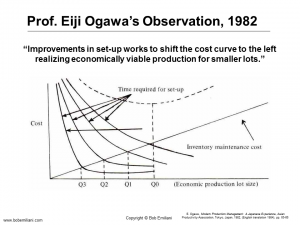 Economists, not knowing the details of production, seem to think all set-up times are fixed and lengthy in duration, part queue times are long, and part travel must be a long distance. But as we know in Lean, the idea is to get material and information to flow, which requires reducing set-up time, queue-time, and part travel. Ogawa’s graph (left) tells you why set-up reduction is so important, yet few companies do this well. Set-ups, whether in manufacturing or service processes, must be 9 minutes or less.

So what does this mean in practical terms and in relation to economies of scale? It means that economies of scale, like Ogawa’s cost-lot size curve,  is not one curve, but a family of curves representing different economies based on the production method used.

Production is actually time-dependent because many different methods can be used to produce goods or services. In contrast, the economies of scale curve is considered by economists to be time-independent – a major mistake, as is their dismissal of diseconomies of scale, both intrinsically and as a function of production method (the upper curves representing greater diseconomy compared to the lower curves). 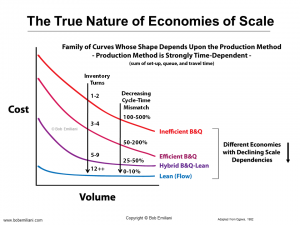 The implications for leadership are obvious: forget about economies of scale (volume). It is far more important to reduce set-up time, queue-time, and part (or document) travel. Greatly reducing time and distance is critical to the long-term success of an organization, yet this cannot be done in isolation of Lean principles and the other Lean practices and methods (as Art Byrne will emphatically tell you).

But, the relationship between this and how managers lead organizations runs much deeper. While managers talk a lot about time and the importance of speed, they really don’t understand either. Understanding the time function of leadership is the key that unlocks great organizational performance. Here are a few examples:

The conventional focus among people who study leadership is on intangible factors such as having a charismatic personality or being an authentic leader. This illustrates a severe lack of critical thinking. Time, material flow, and information flow are a critically important function of leadership. This unique perspective is the focus of my graduate leadership course at the university and my executive training course outside the university. I hope you want to learn more about it. You can do so by reading my books.