Lean Can Learn from History 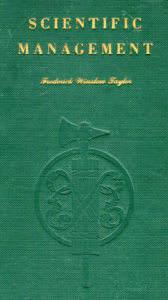 As you may know, I am a serious student of the history of industrial management, specifically the origins and evolution of Scientific Management and its linkages to the origins and evolution of Toyota’s Production system (TPS, popularly known as “Lean production” from 1987 to 2007 and “Lean management” post-2007). This includes the life and times of Frederick Winslow Taylor, the father of Scientific Management, as well as the evolution of The Taylor Society, which was formed after Taylor’s death in 1915.

I have been going back through my old books recently to once again study the evolution of Scientific Management between about 1890 to late 1920s. Had the Lean movement been aware of this history, many mistakes and frustrations might have been avoided. Let me share with you some important aspects related to Scientific Management and how it evolved over this 30-year period. Much of this will sound familiar to you in the context of Lean, and therein lies one of our problems: Not learning from history.

Ultimately, Scientific Management did not do enough for the worker in terms of improved pay and working conditions, principally due to misunderstanding and malpractice by supervisors and mid-level managers. Scientific Management did not seek to, and, later, was unsuccessful in engaging those in the C-suite, whether to improve the business, professionalize business leaders, or advance its own interests.