What is the future of Lean management when some of its leading proponents construct an alternate reality in which Lean transformation processes are claimed to be fail-safe? Perhaps Lean is unlike anything else in existence, given to us fully formed by its creator, and, in some magical or occult way, is not subject to failure. The earthly reality is that Lean management has succumbed to the business logic that success is a given in any endeavor undertaken merely because business has undertaken the endeavor. The fact-based world of Lean management has now entered the realm of philosophical realism. Senses have been muted in favor of the construction of a more acceptable picture of reality where any improvement made using Lean is a success. The question is why do they alter the facts to fit their views?

Cognitive biases such as this are commonly found in business. Leaders, being success-oriented, minimize or ignore problems. This is a long-standing tradition in business that nearly everyone is familiar with. We all have been part of a disastrous project, program, initiative or other activity that senior management declared to be a success. And we rightly laughed at the absurdity of that claim because the facts shouted otherwise. If not corrected, cognitive biases eventually lead to enormous real-world problems and possibly ruin. All you have to do is think of disasters such as these which harmed or killed many people: Boeing 737 Max development program, Wells Fargo’s culture of fraud, Equifax’s data breach, General Electric’s stunning downfall, the Morandi bridge failure, BP oil well explosion, and defective Takata airbags. Under the spell of cognitive biases, improvement is possible only after disaster strikes.

Taiichi Ohno recognized the likelihood of failure of TPS, and by extension Lean (long said to be the same as TPS), because it “requires a revolution in consciousness, a change of attitude and viewpoint by business people” (Toyota Production System, T. Ohno, Productivity Press, 1988, p. 15). In other words, business people must abandon their traditions and they must abandon the status quo. Ohno said: “Companies make a big mistake in implementing the Toyota production system thinking that it is just a production method. The Toyota production method won’t work unless it is used as an overall management system… those who decide to implement the Toyota production system must be fully committed. If you try to adopt only the ‘good parts’, you’ll fail” (NPS: New Production System, I. Shinohara, Productivity Press, 1988, p. 153 and 155). It is obvious upon cursory inspection (a gemba walk, if you prefer) that the vast majority of companies have adopted only the “good parts,” and thus, by Ohno’s definition, have failed. 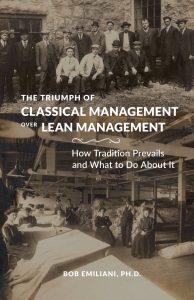 Some organizations have succeeded adopting the good parts, but that also means their effort to learn and practice Lean management has fallen short. You may know this phenomenon by the more familiar name I coined nearly two decades ago, “Fake Lean.” Why do business leaders consistently adopt only the good parts of TPS and only the good parts of its derivative, Lean management? It is, simply, leaders’ preference for traditions and the status quo — succinctly, “business as usual,” because Lean transformation does not serve the interests of the corporation or its leaders. But what are the traditions, why are they important to leaders, and why is the status quo so hard to displace? These questions are comprehensively analyzed and answered in the book The Triumph of Classical Management Over Lean Management: How Tradition Prevails and What to Do About It. It provides levels of details never before presented and also offers practical countermeasures.

I am told that saying “Lean failed” does not show respect for the people on the front line who made earnest efforts to improve processes. This is a red herring. Of course, we respect the valiant efforts of people who were put in a terrible position by their management but who nonetheless worked hard to make improvements. The fact is, management made the decision to adopt only the good parts, which guaranteed that people would be forced to struggle mightily to make any improvements. But while improvements may have been made by front-line personnel, we must acknowledge the likelihood that their morale has been degraded, that people may have been laid off or sidelined by management for their failure to achieve desired results, and that resources for improvement have been withdrawn. The plain truth is that knowledge accumulated over the last 40 years has not appreciably helped reduce people’s struggles to improve processes and achieve a Lean transformation. The failure to aggressively investigate why — truly, decades of inaction by the principal organizations that promote Lean management — is, by definition, disrespect for people.

Denying that Lean transformation processes fail exposes at least four forms of illogical thinking (in addition to the red herring previously cited): false assumptions, avoiding the force of reason, abuse of expertise, and special pleading. This is a remarkable feat of illogical thinking coming from people who claim to be logical fact-based thinkers and who praise learning from mistakes. So perhaps there is something else going on that explains the need to think in this odd way.

Saying “Lean can’t fail” is a new rallying cry that has gained momentum over the last few years. It is a deception. It smells of having the purpose to keep alive the business of promoting Lean rather than having the purpose to understand the causes of Lean transformation process failure and to learn and improve, thereby respecting people. I have commented in the past about the “Lean industrial complex” – a coalition of individuals and groups that share vested interests in the continuous growth of Lean and the sale of Lean products and services. This too indicates that Lean has succumbed to business logic – which includes its own nascent traditions and efforts to maintain the status quo, succinctly stated as “business as usual,” and the inability to admit that what they are selling cannot, in most cases, be made to work as imagined.

It is ironic that those who promote learning and problem-solving wish to avoid solving this important Lean transformation problem and ignore learning relevant new information that will help solve the problem. Whether one acknowledges “Lean failure” or not, we all share the same interest – advancement of TPS and Lean – but differ only in how the problem is seen and the depth to which to study and learn from it so that others may benefit. Perhaps the work of understanding the problem and rigorous failure analysis is avoided because there is a fear of what it might expose: a remarkably complicated problem that has no easy solutions. It will open up the Pandora’s box of hindsight — misunderstandings, poor strategy, fumbled execution, diminished reputations, and the like. But so what? Move forward in a no-blame way, just as one would at the start of a Lean transformation.

Given the trove of new information and practical countermeasures presented in The Triumph of Classical Management, one might expect the top people and organizations that promote Lean management will learn from it and try new things. But it appears they have become mired in their own traditions and status quo. Unbelievably, they pin their hopes on the next generation of leaders, wishing they will do better than the prior generation. It is not respectful to ask the next generation of leaders to confront the same difficult problems that the past generation of leaders could not solve. Such thinking operates under the false assumption that there is no new information that could help improve the prospects for greater success. 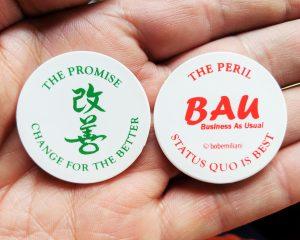 Long ago we learned from Toyota that failures are treasures to learn from. If today there is only Lean success, then what is there to learn? The sensitivity to the words “Lean failure,” whether in reference to Lean transformation processes or other, may be well-meaning, designed to praise people’s efforts, and offer support and hope, but these benefits are ephemeral when the underlying problem remains unsolved. At the present time, it may be too much to ask for Lean promoters to return to the fundamentals and teach both the promise of Lean and the peril of traditions so that future leaders can benefit from full disclosure and can chart improved paths based on knowing the facts of the situation. While the continuation of “business as usual” is unacceptable, it appears to be the favored path going forward.