Lean is Illegitimate. Or is it?

To this day, Lean management has yet to enter the mainstream in business. It remains solidly on the fringe, despite great efforts by many people over many decades. You almost never hear of Lean management in the business press unless the article is written by an insider such as James P. Womack or John Toussaint. You hear about Just-in-Time in the business press only when disaster strikes; when an earthquake in Japan or flood in Thailand disrupts production that has been carefully synchronized with demand. Kaizen is rarely mentioned in The Wall Street Journal or Financial Times. Improved relationships between employer and employee, or between buyer and seller, are not newsworthy.

What are we to make of this? Management, as it has been long understood and practiced by businessmen, is accepted and considered legitimate, particularly as informed by classical economics. The businessman’s management methods remain the standard of practice, despite numerous obvious faults and shortcomings. In contrast, Lean management is the illegitimate bastard child of the businessman’s management practice, fathered by mechanical engineers. What on Earth do mechanical engineers know about business?

Think about what mechanical engineers do. They like to understand how systems and sub-systems work. In looking at the businessman’s practice of management, the mechanical engineers saw many technical weaknesses. They also saw many weaknesses with respect to human relations and job performance. Importantly, the engineers were far less influenced by the five aspects of classical economics that informed the businessman’s practice of management, likely because they lacked the businessman’s background and biases, and saw classical economics as impractical and creating many more problems in the system than it solved.

From those observations, the engineers set out to design new systems of management – a new standard – that worked better than the businessman’s management practice; better for employees and customers, which also benefited investors, suppliers, and communities. The initial designs did indeed work better, but they were not good enough. So the engineers set out to continuously improve the design of their progressive management system. This happened over generations of engineers, in different companies, and in different parts of the world.

The impetus for engineers to develop something better than the businessman’s practice of management was the observation that there were many abnormal conditions that the businessman did not notice or did notice but accepted as the normal condition. Where the businessman proudly saw a functioning system that made money (their standard for success), the engineer saw a rickety system prone to failures large and small, and which resulted in great financial and non-financial costs. This was not something to be proud of.

The engineers saw work stoppages, bad employee relations, low productivity, excess inventories, poor quality, long lead-times, unhappy customers, etc., as clear signs of abnormal, not normal, conditions. The system design was bad and it therefore did not work right. Failure was not intermittent; it was a daily and hourly occurrence. Surely one can do better.

The money that the business earned, and which was satisfactory to the businessman, was unsatisfactory to the engineer because the system operated well below its earning potential. The engineer imagined a new standard, one that would result in much greater financial success without the usual trade-offs that plague the businessman’s thinking. They imagined a larger pie that everyone could share in, thereby replacing the fixed size pie that everyone fought over for a larger share. It was a dream that could be turned into reality with some hard work. 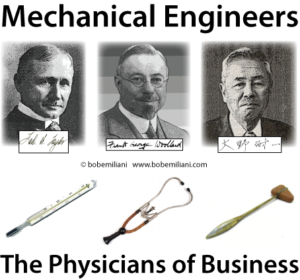 Mechanical engineers became the physicians of business, seeking to improve its health and well-being for the benefit of all, long into the future. But for that to happen, businessmen would have to learn new things and develop new habits of mind. They would have to think differently to create a new understanding of what were normal and abnormal conditions.

Yet there was, and continues to be, great resistance. The businessman’s management practice is entrenched through hundreds of years of practice, informed by classical economics, and the businessman today is at the peak of their influence in business, politics, and society.

Unlike the businessman today, and of yesteryear, the credo of the physicians of business is “Do no harm.” Why? Because doing harm to employees or other stakeholder is a defect in the management system that causes it to fail – and fail often. Abnormalities occur when harm is done. Hence, the importance of re-defining the “normal condition.”