For all our efforts, we have not made much progress in eliminating the bias against Lean among experienced leaders who are deeply committed to conventional management. After more than three decades together, it is clear that our warring couple, conventional management and progressive Lean management, have significant differences and need to meet with a relationship counselor.

First, we need a trained couples counselor. Who might that be? It would be someone who is impartial and whose only goal is for the couple to resolve their conflicts. The manner in which we have sought to counsel experienced leaders who are deeply committed to conventional management has been anything but impartial. Our enthusiasm belies impartiality.

In the first counseling session, each would offer a strong defense of their perspective. Each would claim that their approach to leadership and managing people and processes works. And, both would have ample evidence to support their position. Not much progress would be made initially. Perhaps after several counseling sessions, defensive positions would give way to honest communication, hereby revealing fundamental issues and sentiments that sustain each position. While communication and the relationship may improve, neither is likely to come to the other’s side. Conflict will continue to exist between conventional management and progressive management. Why?

Those of us who advocate for Lean think we know a truth that others do not. We have organized into groups that share this truth as well as a belief system (culture). Our numbers grow as we seek more people who are like us. Since the belief system is the foundation of the truth, those who do not share the beliefs cannot accept the truth even if it appeals to them. The more we try to show experienced managers that they hold the wrong truth (and faulty beliefs), the more they hold onto their truth (and beliefs). Our numbers are therefore structurally limited, likely relegating progressive management to permanent minority status. 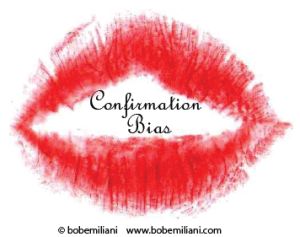 For decades, we have witnessed Lean’s kiss of death: confirmation bias. Experienced leaders – those who have spent decades practicing conventional management – are not seeking to have their truths and beliefs invalidated. Instead, they look for information that confirms their views and ignore information that contradicts it, even if the contradictory information is the absolute truth.

Their success, image, and sense of self-worth have been created by conventional management. They will strengthen their trust in the truth they know and solidify their beliefs even if they are incorrect because it continues to make them look good. It is threatening for leaders to admit they are wrong. Confirmation bias renders irrelevant any suggestion that there is a difference between Lean done right (REAL Lean) and Lean done wrong (Fake Lean). Decisions made by leaders are often based more on how one looks to self and especially to others than on the facts and logic.

Indeed, the supply of incorrect information and misinformation about Lean exceeds the supply of good information. Further, there is greater demand for incorrect information, as that helps assure nothing changes. If one were to get the opinion of experts in management or organizational effectiveness (university professors), the vast majority would say that Lean management is harmful to employees, unique to Japanese companies or to Toyota, or is just a passing fad.

These experienced Lean leaders are our shining lights, but there are too few of them. Nevertheless, they, as well as independent voices such as the few professors who know Lean well, must develop simple messages and repeat them often to undermine confirmation bias. We must focus on facts to overcome preconceptions.

And, lest we get too full of ourselves, Taiichi Ohno* reminds us of this:

“Another way of stating the essence of the Toyota production system is to say we are doomed to failure if we do not initiate a daily destruction of our various preconceptions.”