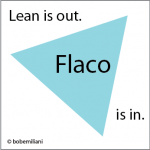 People often complain about the name “Lean,” the generic version of Toyota’s management system. It has long had a bad connotation because most managers misunderstand Lean and have used it to lay people off.

So, I propose the following new name: “Flaco.” Instead of “Lean management,” we will now say, “administración Flaco.”

Here is the correct pronunciation:

But seriously, while we may wish for a better name than Lean, the reality is that you could re-name Lean “Free Money” and most senior managers (particularly of big companies), in their crazy quest to “maxmize shareholder value,” would still avoid it. Why is that? Digging into this effect reveals many causes, including these very important ones:

Lean is a lot more like learning how to play the piano well than singing along to a pop song on the radio. Lean is hard for mid- and late-career people – the people in charge – to want to learn and do well. So, they do it poorly instead, thereby giving us tons of examples of “Fake Lean.”

We have a problem that lies at the nexus of human neurobiology, cognition, and motivation. In the 130 year history of progressive management, nobody has yet cracked the code. The good news is that people are thinking about this problem more deeply than ever before (Dr. Mark Jaben, for example, working on the neurological basis for accepting or rejecting Lean, and how Lean management principles and practices are a better fit with how humans actually think than conventional management). The differences between Fake Lean and REAL Lean are understood better than ever. And, people’s view of the purpose of business is evolving and could create, in the next five to ten years, much more favorable condition for the spread of REAL Lean.

So, let’s not worry about the name “Lean.” Let’s instead worry about helping and developing leaders who do not see Lean as something to fear, who are willing to challenge their beliefs, behaviors, and competencies in relation to the economic, social, political, and historical aspects of business, and who are motivated to learn new ways of thinking and doing things. They are the future of Lean.