Experiments, as understood in the fields of science or engineering, means to verify or refute a hypothesis using a controlled and repeatable procedure. The tests that make up the experiments are performed systematically and the results analyzed in an unbiased way using logical thinking. The scientific method is used when conducting experiments and consists of the following steps:

Trial and error is another type of problem-solving process but differs from experiments in important ways. Someone attempts to do something many times in an unsystematic or uncontrolled way until they succeed (or give up). Little in the way of theory or insight is applied in trial and error problem-solving. Therefore, it is a less informed way to solve problems (informed guesswork), but which can nevertheless be very effective. It relies on one being motivated to try again and again and again – basically, to practice – and be able to withstand lots of failures and not lose motivation. 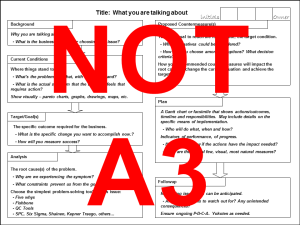 In recent years, people talk about conducting “experiments” to achieve a desired future state more than they talk about trial and error. Yet, in the old days the creator of Toyota’s production system (TPS), Taiichi Ohno, talked mostly about “trail and error,” though sometimes “experiments” as well. Either way, the focus was on doing.

In his book Today and Tomorrow (1926, p. 62), Henry Ford said he used the “Edison Method” of trial and error (also called the “Edisonian approach“). Taiichi Ohno admired Henry Ford and was familiar with his writings. Perhaps Ohno was influenced to adopt the Edison Method of trial and error in the development of TPS, making it more of an uncontrolled rather than controlled experiment to improve productivity, reduce costs, and achieve flow by analyzing work content, work sequence, equipment layout, etc.

“Mr. Ohno was a thorough champion of workplace-led management and of following the principles of fact-based reason. Through persistent on-the-factory-floor trial and error, he built a system that relentlessly pursues the elimination of waste to realize cost reductions.”

“Indeed, we called it the Ohno System for a time when we were going through a period of trial and error to establish an innovative production system.”

“Standardized work at Toyota is a framework for kaizen improvements. We start by adopting some kind – any kind – of work standards for a job. Then we tackle one improvement after another, trial and error.”

“Our biggest problem with this system [kanban] was how to avoid throwing the earlier process into confusion when a later processes picked up large quantities at a time. Eventually, after trial and error, we came up with production leveling…”

“As an experiment, I arranged the various machines in the sequence of machining processes.”

“Step by step, I solved the problems related to the system of withdrawal by the later process. There was no manual and we could find out what would happen only by trying. Tension increased daily as we tries and corrected and then tried and  corrected again… Experiments were always carried out at a plant within the company that did not deal with parts ordered from the outside.”

“Our approach has been to investigate one by one the causes of various ‘unnecessaries’ in manufacturing operations and to devise methods for their solution, often by trial and error.”

What can Lean practitioners learn from this?

First, it appears the development (and continuing evolution) of TPS was simultaneously a uncontrolled and controlled experiment, depending on what aspect of TPS was under development. Trial and error seems to have been more dominant and used when the problem was difficult to understand due to the existence of many variables, while experiments seem to have been used less often when the problem was easier to understand and had fewer variables. Either way, these two practical methods were used to better understand problems and identify appropriate countermeasures, long before the invention of A3 reports.

Third, we can learn from the tenacity of Toyota people to understand and correct problems over decades of time to achieve flow. I recently visited Toyota’s Motomachi automobile assembly plant in Nagoya, Japan. One of my key takeaways was that Toyota people figured out, through both trial and error and experiments, the timing and sequence of mixed model production and flow. Few organizations undertake such a great task, yet one that is so critical to the effective functioning of a business in terms of productivity, quality, output, cost, profit, customer satisfaction, and growth. Fewer still would understand that this problem in never “solved,” but is instead continuously evolving.