But, again, there is more to Lean leadership than meets the eye. So, I continued to think about ways to better understand Lean leadership and make it accessible to more people. My efforts have long been directed at moving leadership forward from a subjective, arts and social science based view to a more objective, fact-based, science and engineering view. The progression from belief → behavior → competency is both objective and undeniable, and succeeds in putting leadership onto a solid, fact-based, science and engineering footing. Something that had never been done before.

But can we go even further? Can we make Lean leadership even more specific and tangible, so that leaders have no option other than to improve? In other words, give leaders an even simpler, even more practical method that they cannot excuse themselves from doing- something so clear that it would be irresponsible for them not to do. What on earth would that be? 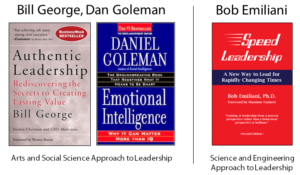 The left side of the image shows the traditional ways of thinking about leadership and how to improve it. There is nothing really wrong with these; they are not incorrect and can indeed help some people. But, its impact is very limited because it is based on a subjective, arts and social science based approach. The right side of the image shows a new way of looking at leadership, through the lens of leadership processes. Understanding leadership as processes makes leadership objective and fact-based, consistent with the science and engineering approach to process improvement that Lean people are so familiar with for producing goods or services. This an even bigger revelation than the leadership belief → behavior → competency progression seen in current and future state value stream maps, which, by itself, is far more helpful that  traditional ways of thinking and improving leadership.

The hundreds of leadership errors presented in Speed Leadership are ones that you will easily recognized as having been made by your boss, or you having made to your subordinates. There is no theory here, only common everyday errors that leaders make again and again. And there is no denying the existence of the errors. Making these errors visible for all to see lays bare the true leadership challenge: To reduce and eliminate leadership process errors and create more capable Lean leaders.

As with everything I’ve done to study and articulate Lean leadership, it is consistent with Lean principles and practices. There is no need to learn new social science constructs (emotional intelligence or authentic leadership) that only loosely correlate to daily workplace challenges. Now, there are concrete correlations between processes that leaders engage in at work, the errors made, and simple ways to improve.

Click here to read the back story on how the idea for understanding leadership from a process perspective came into being.