In 2009, John Shook wrote an article, “Toyota’s Secret: The A3 Report.” Being a Toyota veteran, nearly everyone outside of Toyota believed it to indeed be Toyota’s secret. John said in the article, “[this] deeper method of thinking… lies at the heart of Toyota’s sustained success.” A3 reports, a way to teach people how to think and learn, have rapidly become embedded in organizations as the principal method for problem-solving. It has become a badge of honor for managers to say “We are an A3 problem-solving organization” or “We use A3s for every problem.”

Yet, A3 reports are a relatively new tool. The 77 year history of Toyota suggests that kaizen, not A3 reports, actually lies at the heart of Toyota’s sustained success. Eiji Toyoda, former chairman of Toyota once said, “At Toyota, kaizen is in the air.” Another former chairman, Fujio Cho said, “[Kaizen] is the first word that comes to mind when we think of Toyota.” The current president, Akio Toyoda says: “Kaizen is an unending process. All of us at Toyota share a commitment to that fundamental principle of the Toyota Way.” Helpful as they may be, I’ve never heard anyone say anything like this about A3 reports.

Unfortunately, kaizen is poorly understood and has led to organizations doing only a narrow and much simpler subset of kaizen practice. As a result, most organizations do not achieve much in the way of productivity improvement and cost reduction. That is why surveys consistently find that Lean efforts fall short of expectations. The dearth of high-impact results helps explain why management often lays off continuous improvement specialists.

Let’s begin by understanding three main types of kaizen: man, material, and machine. What follows focuses on kaizen for the first category, “man.” The same, however, applies to the other two categories. It is within these three areas that high-impact results are achieved, usually in combination with one another. 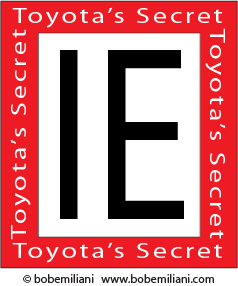 Kaizen has its roots in the late-19th and early 20th century innovation called “industrial engineering.” This new discipline, created by Frederick Winslow Taylor and Frank Gilbreth, includes time and motion studies to analyze how people work. These and other basic industrial engineering (IE) tools established a baseline from which improvements could be made. The methods they developed helped organizations to greatly improve productivity, reduce costs, and improve quality. These methods, which were carried over into the World War II-era Training Within Industries program, lay the foundation for the development of Toyota’s unique IE-based kaizen method (T. Ohno, Toyota Production System, p. 71):

“IE [industrial engineering] is a system and the Toyota production system may be regarded as Toyota-style IE… Unless IE results in cost reductions and profit increases, I think it is meaningless.”

Kaizen was of great importance to Toyota because their productivity was said to be one-eighth of U.S. manufacturers in the years immediately after World War II. In addition, their quality was low and costs were high. To deploy kaizen more broadly across the organization, many people would have to learn industrial engineering methods. Toyota hired Shigeo Shingo to deliver IE methods training (process analysis, time study, motion study) four times per year beginning in 1956. Toyota people then further developed and improved their IE-based kaizen method.

Imai informs readers of the interconnections between kaizen, total quality control (TQC), Quality Control (QC) circles, and other elements of management practice in major Japanese corporations. However, Imai focuses mainly on the relationship between kaizen and quality, with little treatment of the impact of kaizen on productivity and cost reduction. Further, Imai does not give readers an understanding of kaizen’s roots in industrial engineering or the method for practicing kaizen. Readers can easily come to the conclusion that kaizen is company-wide TQC and working-level QC circles and suggestion system. Add to that the way kaizen has been commonly understood over the past few decades, as small or incremental improvements, which results in activities focused on making only small improvements.

For many years, people’s understanding of kaizen was very limited because there was no clear description of kaizen. The only way to learn it was to engage a kaizen consultant such as Shingijutsu, beginning in 1987 (See Kaizen Forever and Shingijutsu-Kaizen). It would not be until years later that a few books would appear that describe kaizen accurately in terms of its industrial engineering roots.

“Above all, one of our most important purposes was increased productivity and reduced costs.”

“…although cost-reduction is the system’s most important goal, it must achieve three other sub-goals in order to achieve its primary objective. They include:

1. Quantity control, which enables the system to adapt to daily and monthly fluctuations in demand in terms of quantities and variety;
2. Quality assurance, which assures that each process will supply only good units to subsequent processes;
3. Respect-for-humanity, which must be cultivated while the system utilizes the human resources to obtain its cost objectives.

It should be emphasized here that these three goals cannot exist independently or be achieved independently without influencing each other or the primary goal of cost reduction. It is a special feature of the Toyota production system that the primary goal cannot be achieved without realization of the subgoals and vice versa. All goals are outputs of the same system; with productivity as the ultimate purpose and guiding concept, the Toyota production system strives to realize each of the goals for which it has been designed.”

This is the way you should understand TPS, inclusive of The Toyota Way (and a much better way to to understand both Lean and Lean thinking).

In the book The Birth of Lean (which should have been titled “The Birth of Toyota’s Production System“), Taiichi Ohno said (page 8):

“We raised labor productivity three- or four-fold by modifying the work procedures to allow for operating each machine with a single operator.”

There is only one way to do this. It is through the application of industrial engineering methods in tandem with an understanding of the seven wastes: overproduction, waiting, transportation, processing, inventory, motion, defects (there are many more than seven wastes). That is Toyota’s secret.

Kaizen is the analysis of work that people do, with the aid of a stopwatch, using various calculations and one-page forms to comprehend the current state and document the future state achieved:

These are the basics of kaizen that must be mastered. (That’s right, value stream maps are not used in kaizen, nor are A3s or six sigma. Get over it).

Many organizations today do not understand that kaizen means to analyze work processes using a stopwatch. Or, they understand that yet choose to do something that will not rearrange both people and work sequence, for fear of upsetting workers or losing buy-in for change. I find this to be true especially in service organizations such as financial services, healthcare, and higher education. You can make that choice, but please recognize that you will gain little in the way of productivity improvement, cost reduction, quality improvement, etc. Said another way, you may accomplish in 10 years what an organization that understands IE-based kaizen will accomplish in one year.

QC circles, suggestion system, brainstorming, etc., all all important things for people to do every day, but they are not sufficient of one wishes to survive and prosper in competitive markets. It is akin to you training one hour a day for running 10,000 kilometer race, while your competition trains for 8 hours a day. You’re just not competitive. Therefore, you must do IE-based kaizen as well. This should be the primary focus, ahead of QC circles, suggestion system, brainstorming, etc.

There is a reason why organizations such as The Wiremold Company led by Art Byrne and Virginia Mason Medical Center led by Gary Kaplan are widely seen as Lean exemplars: They did kaizen – lots of kaizen of the type rooted in industrial engineering analysis of work, supported by QC circles, suggestion system, etc. They are exemplars because IE-based kaizen is far better at teaching people how to think and learn than A3 reports.

For many years, description of the IE-based kaizen method was not available in books. Instead, you had to get this information from people; former Toyota or Toyota subsidiary employees working as kaizen consultants. Today, there are many books with kaizen in the title. Those that make no mention of takt time, cycle time, time study, motion study, standardized work, etc., are confusing QC circles, suggestion systems, brainstorming, etc., with IE-based kaizen. Such books will not be of much help to you.

There are two books that describe Toyota’s kaizen method. The first is Toyota Kaizen Methods: Six Steps to Improvement (2011) by Isao Kato and Art Smalley. It is an excellent resource and clearly illustrates the connection to industrial engineering-based analysis of work. The second is Kaizen Express: Fundamentals for Your Lean Journey (2009) by John Shook and Toshiko Narusawa. It gives a very nice, concise description of TPS what will help focus you in your kaizen efforts. The Appendix shows you the forms and how they are used in kaizen. These books should be at the top of your list to buy, read, re-read many times, and put into daily practice. Please go back to the basics and master the basics.

Finally, please reflect on the wise words of Fujio Cho: “The philosophy that makes [kaizen] possible is ‘Respect for People’.” Kaizen means IE-based process improvement that improves the human condition.