We are all aware that precious few Lean transformations fulfill the vision of many Toyota-like managed companies in all industries. For decades, the prevailing wisdom was that better explanations of Lean, from Lean tools to Lean strategy, and more and more examples of Lean success, no matter how limited, would gain ever-growing numbers of CEO converts. But that has not happened, and so the prevailing wisdom has turned out to be wrong. Furthermore, the common analysis of what’s holding Lean back has consistently been superficial.

My work, from the beginning (ca. 1994), has sought to unravel the problem of why business (and other) leaders do not adopt Toyota’s management system, or its derivative, Lean management, given its many benefits. I have persisted in this effort like no other, as I am often told, because it is important to people’s lives and livelihoods — this is something that I care deeply about.

My recent research makes it clear that the past does not merely inhibit the advancement and practice of Lean, it cripples Lean. Specifically, various economic, social, political, and historical artifacts — particularly de jure thinking and practices, ancient in their origin and ubiquitous among leaders throughout time. These hold great power over the de facto thinking and practices, ubiquitous among technicians (non-managers) throughout time. This is the reason why we see so few Lean transformations. It is too bad we did not know this 35 years ago. But now we do.

Recently, I created several images to help people understand how de jure routinely overpowers de facto. The images are collected in this blog post, and provide unique insight into why it has proven to be so difficult to advance Lean management. Click on the images below to enlarge them, and pay close attention to their details. 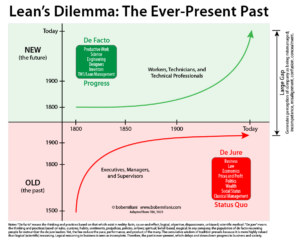 The second image illustrates how the ancient past remains with us, in force, to the present day, and highlights the time delay caused by de jure. 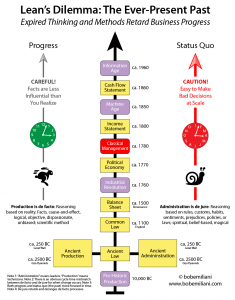 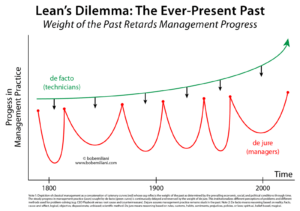 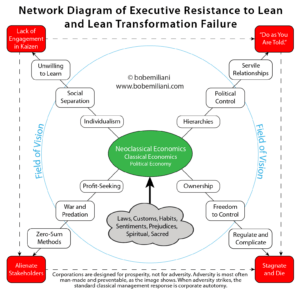 The fifth image plainly reveals the fundamental differences between Toyota’s mostly de facto management thinking and practice and other businesses’ mostly de jure management thinking and practice. A quick example: The “price system” (price = cost + profit) thrives, while Taiichi Ohno’s “cost system” (price – cost = profit) is of no interest to executives. They find the “cost system” (and thus Lean management) unappealing. The “price system” has long been institutionalized, and executives are habituated to it. 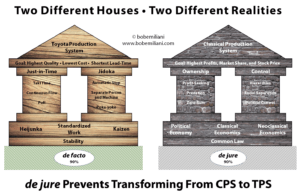 The sixth image conveys the twin message that the approach must change given the existence of new information (here and here), and that the Lean movement cannot keep doing the same things for another 30 years. 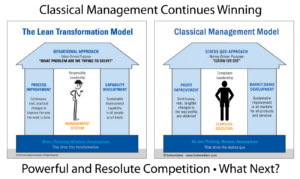 The seventh image illustrates the distinction between de jure for business problem-solving and de facto for technical problem solving, and thus answering the question why executives invariably delegate Lean to lower levels of the organization. The run-the-business vs. run-the-process technical divide is a deeply entrenched mental model that functions as a strong barrier against the uptake of Lean among executives — especially, but not limited to, big corporations. 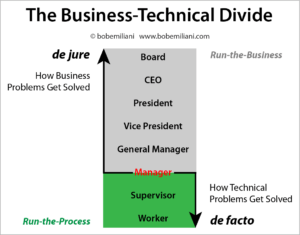 Business leaders view de facto reasoning as incomplete, and often ill-advised for decision-making. Therefore, a de facto system of management (i.e. TPS/Lean) is viewed as inferior and manifestly unsuitable. That is why in this Star Trek analogy, Commander Spock (de facto) is second in command. If Captain James T. Kirk (de jure) is unavailable, the third in command, chief engineer and second officer, Lieutenant Commander Montgomery Scott (de jure), takes control of the starship USS Enterprise. For most business leaders, de facto is always relegated to second in command, at best, no matter who is in charge. Hence the ubiquity of “Fake Lean.” 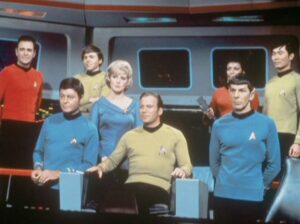 Read my new book to learn the details on what is holding Lean back and some practical ways that we can move forward.