When Leaders Improve, Everyone Improves 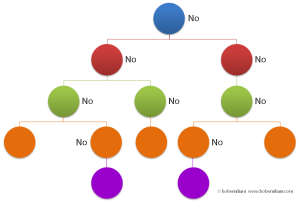 “No” is a bad word for leaders to say. It broadcasts to people, “Don’t try new things,” “Don’t experiment with different ways to correct the problem,” and “Don’t take action when problems arise.” It shut’s down people’s minds and disables the uniquely human challenge to make things better through thinking and creativity. Unfortunately, organizations are hierarchies in which there are too many people who can say “No.” Leaders who say “No” teach followers to maintain the status quo.

Why do people in leadership positions say “No?” Are they insecure? Do they think those below them are inferior? Do they misunderstand what is being said to them? Are they trying to preserve a social or political structure? Whatever the reason, saying “No” disempowers people, drains them of their energy and enthusiasm, and makes them compliant to their bosses’ wishes. By disrespecting people, the boss maintains control. The boss is happy, but nobody else is.

But, a remarkable thing happens when the top leader starts saying “Yes.”

Art Byrne, retired CEO of The Wiremold Company, tells a story soon after he arrived at Wiremold where a worker who wanted to knock out a wall to help achieve a process improvement idea. The worker was sure that Art would say “No.” But, Art said “Yes.” That one “Yes” changed the worker’s attitude towards improvement. It changed other worker’s attitude about improvement as well. The message from the boss was, “It’s OK to try new things,” “It’s OK to experiment with different ways to correct the problem,” and “It’s OK to take action when problems arise – you don’t need my permission.” Art’s direct reports learned from that as well. Their “No’s” became “Yes’s.”

Most bosses say “No.” Art said “Yes.” When Art improved, everyone improved. This is an example of what I mean by “Speed Leadership.”