I had the great pleasure of observing kaizen at a company in Connecticut the week of 28 July. The kaizen was facilitated by Chihiro Nakao, co-founder of the world-famous Shingijutsu company. For those who are not familiar with Mr. Nakao, here is a brief bio from Shingijutsu’s web site: 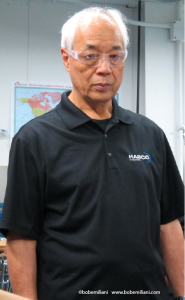 “Mr. Nakao spent the first 27 years of his career working for the Toyota Group where he was mentored and trained by Mr. Ohno, originator of the Toyota Production System (TPS). Mr. Nakao was a part of the original autonomous study groups initiated by Ohno who ultimately came up the basic philosophy and approach of TPS. Mr. Nakao founded the Shingijutsu Company in 1987 at the behest of Mr. Ohno.

Mr. Nakao has dedicated himself to spreading the principles of the Toyota Production System around the world to create the Global Production System. Mr. Nakao was recently appointed Jutsu Shu, and is now the owner and steward of the company’s art and practices. This is important since it ensures the art or technology and its practice are current, effective and is used correctly by all sensei.”

While I have participated in a number of Shingijutsu kaizens as a team member or team leader, this was the first time that I was able shadow and observe the sensei for five days of kaizen.

As a team member or team leader, you meet with the sensei for perhaps a total of 60-90 minutes per day. I was able to spend all day with sensei, every day, including dinners and my duty as sensei’s driver. He spoke a lot, which means I learned a lot. And, I will learn more in the future as I learn what I learned.

What I learned from Mr. Nakao about kaizen, processes, people, respect, creativity, innovation, motivation, and business is almost indescribable. Mr. Nakao is an amazing sensei – the best there is. He is also a generous man, happy to share his profound knowledge with all whom he comes into contact with. I took copious notes and hundreds of photos.

Mr. Nakao things in ways that very few people do and says things that nobody else says. The depth and breadth of his knowledge and insight is astounding. This informs an approach to kaizen that is unlike anyone else. Indeed, it is THE approach to kaizen. Why? Because it is passed directly from Mr. Ohno to Mr. Nakao, inclusive of Mr. Nakao’s dedicated efforts to build upon what he learned. This lineage matters.

People complain that kaizen often fails or yields disappointing results. This is because not all kaizen is the same. Firstly, I am certain there is a problem with the method used. Bad process yields bad results. Second, the success of kaizen – the number and magnitude of actual improvements made and resulting learning – depends a lot of on the facilitator. So, kaizen is a combination of method and human (facilitator) capability. In most cases one is missing, often it is both.

Kaizen does not fail or yield disappointing results when both method and capability are strong. Unfortunately, there are far more people whose understanding and practice of the method and their capabilities are weak rather than strong.

Many people say they have been trained by Shingijutsu to strengthen their standing as kaizen consultants. While training is necessary, it is not sufficient. One must have also learned from Shingijutsu. The former is method while the latter is the development of human capability.

And don’t forget, there is no Lean without kaizen. Kaizen is how you learn Lean management. Therefore, the facilitator’s method and capabilities must be strong.

Mr. Nakao’s kaizen method and capabilities are the target condition that kaizen facilitators must work towards. If they do not, then kaizen is practiced incorrectly and is ineffective.