The Back Story – Conversations with Taiichi Ohno 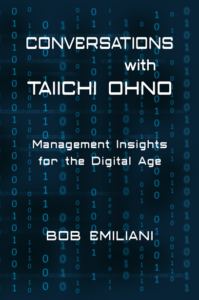 This is the back story to the book Conversations with Taiichi Ohno.

Why write a fictional account of conversations with Taiichi Ohno (1912-1990)? There are a several reasons for doing so.

The second reason is that I have long felt that Ohno’s work has been poorly understood, even by those who carefully study and write about Toyota. Aspects of Ohno’s unique way of thinking and many elements of his work remain unknown, poorly known, or misunderstood. And people easily miss many important details that lie at the heart of TPS.

The third reason is that because people have a poor understanding of the mindset and management practices associated with the Toyota Production System, they have been unable to establish or create something similar to TPS.

The fourth reason is that Ohno’s work, as manifested in the creation of the Toyota Production System, anticipated the digital age. In other words, TPS is more suited for the 21st century than it was for the 20th century.

The sixth reason is that the importance of Ohno’s work remains poorly recognized outside of a subset of the small community of people who practice TPS and its variants such as Lean, Lean Six Sigma, and so on. Others such as business leaders, economists, educators, the business press, and government officials would benefit by learning more about Taiichi Ohno’s work.

The seventh reason is that people have become obsessed with disruptive technologies and see that as the only pathway to success. Ohno reminds us that good thinking, steady work habits, daily improvement, and long-term commitment to a purpose remain necessary now and into the future.

I thought a conversational style of writing would be an effective way to address the various reasons for writing this book.

So, you may ask, “What makes you the expert to tell us about Ohno’s work?” I am no expert in TPS, as I say in the Preface of the book. My efforts to educate and guide people always contain mistakes. Nevertheless, I hope to take my knowledge, accumulated over the last 25 years, and channel Ohno’s way of thinking so that people can more easily understand the purpose and meaning of TPS, and why its true home is in the digital age.

Conversations with Taiichi Ohno is not a discourse on the technical details of the Toyota Production System. Rather, it is an exposition of the management thinking, practice, and decision-making that enables TPS to be established and evolve. In doing so, the practice of management improves, keeps up with times, and does good things for people.

I hope you like the book and that you find it useful.