In their influential 1996 book Lean Thinking, Womack and Jones used the term “lean thinking” to describe what they had learned in their research about the people who were creating Lean organizations. They defined “lean thinking” as consisting of the following five principles that guided people’s actions (pp. 10 and 16-26):

This initial definition is clearly technocratic. Its focus are the processes used to create value. Womack and Jones also characterized it as a “thinking process” used by the managers and workers who create value.

This second definition of “lean thinking” is clearly less technocratic. Its focus is broader than the processes used to create value and includes the purpose for an organization’s existence and the people (managers and workers) who are involved in value-creating processes. Additional description of these two definitions can be found in the Lean Lexicon, published by the Lean Enterprise Institute (LEI).

Then, on 11 September 2014, in an article titled “What Lean Really Is,” Daniel T. Jones offers a third definition (links added to the quote are mine):

“Lean thinking and practice are generic versions of the Toyota Production System (TPS) and the Toyota Way management system.”

This third definition is substantially different from the first and second definitions.

A month later, an article in Fast Company magazine, “10 Signs You Respect Me as an Employee,” authors Michael Ballé and Daniel Jones define “lean thinking” in a new way that is different from the 11 September definition:

“Toyota grounded its management on learning and, over the years, developed a continuous on-the-job learning method based on two pillars: continuous improvement–continuously challenging oneself and learning by continuous small steps–and respect–making our best efforts to understand the obstacles each person encounters, supporting their development and making the best possible use of their abilities. We refer to this as ‘lean thinking.'”

This fourth definition parallels The Toyota Way 2001 document which “clarifies the values and business methods that all employees should embrace in order to carry out the Guiding Principles at Toyota throughout the company’s global activities.” The pillars of the Toyota Way are “Continuous Improvement” and “Respect for People.” Importantly, “people” includes not just employees, but customers, shareholders, business partners, and communities.

While people have always been part of these four definitions, you can see that people – employees – take on greater prominence over time, eventually carrying equal weight to the technical processes used to create value.

What do these changes tell us?

Is it a growing awareness by Womack and Jones that people – employees – are important in Lean; that employees make or break Lean success? Or was the importance of employees seen early-on but ignored in preference for providing what the marketplace demanded: more Lean tools? Is it an evolution in thinking that resulted from asking questions, observation, and personal practice? If so, why did it take seven years since the second definition was established or 13 years since The Toyota Way 2001 was published to see that?

Do the shifting definitions mean that Toyota’s management (and hence, Lean management) was not understood, despite years of close study? And, that “Respect for People” is finally recognized as critically important for managers to understand and practice? Or, has the definition changed over time to suit one’s own purposes? That is how it can appear, now that “Respect for People” has finally been explicitly recognized by the Lean Enterprise Institute and Lean Enterprise Academy. Again, why the long delay?

My view is that the 1996 definition is fine, with the exception of the 5th item, which should have been “Continuous Improvement,” not “Perfection.” The 2007 definition is confusing and it was not necessary to create something new. The opportunity to improve the definition of “lean thinking” came in 2001, when Toyota published their internal document, “The Toyota Way 2001” (or much earlier, around 1991, if one had access to a General Motors internal paper titled “Corporate Culture: Toyota’s Secret, Competitive Advantage,” by Michael Husar). The 1996 definition of “lean thinking” could have been updated in this simple way: 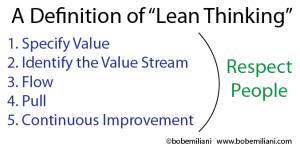 As the image implies, respecting people must occur with each principle or in each step in the value creation process, and where people should include more than just employees. However, this definition represents neither the Toyota Production System nor The Toyota Way. Instead, it would represent Womack and Jones’ unique view of “lean thinking.”

The benefits of doing this would have been a closer alignment between the Lean Enterprise Institute and Toyota’s management principles and practices, and much earlier recognition of the importance of “Respect for People.” After all, that’s what makes Lean work. If this had happened in 2001 instead of 2014, we might have had more REAL Lean and less Fake Lean. That would have led to much better outcomes for employees and other stakeholders – in at least some organizations. In my view, the long delay is inexcusable, while the confusion created is unhelpful. To whit:

Is “lean thinking” the same as “Lean management?” Jones says:

“Lean thinking and practice are generic versions of the Toyota Production System (TPS) and the Toyota Way management system.”

And, a month later, Jones and Ballé describe “lean thinking” as The Toyota Way:

“…two pillars: continuous improvement… and respect… We refer to this as ‘lean thinking.'”

Does that mean “lean practice” is TPS, while “lean thinking” is TW? That does not make sense.

I have long understood Lean management to be the generic description of the Toyota Production System and The Toyota Way. It seems to me that “lean thinking” is better understood as the mindset and thought processes that exists within both the Toyota Production System and The Toyota Way. Therefore, I see “lean thinking” as something different than “lean practice” (Lean management), though the two are certainly necessary and complimentary to each other. Importantly, the mindset must not be separated from the method. But, unfortunately, that is a common occurrence, as is cherry-picking of the method.

Finally, what if “lean thinking” had been defined this way from the start:

where Buddhist philosophy is understood to be the empirical study of natural phenomena, i.e. dharma, and harmony with nature. Where might that have taken us?