The Financial Times recently ran an story in the print edition titled: “UK students cut back on boozing as study costs help focus minds” (FT, 21 November 2013). It is part of an in-depth series on higher education in the UK. 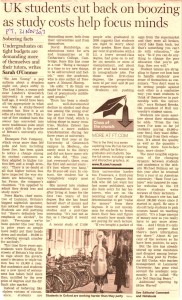 Public university tuition used to cost £1000 per year in the UK (it is free in Scotland), but has recently increased to the maximum price allowed by the government of £9000 per year for many universities (about $14,600). The higher price is leaving students in debt and a lot less buzzed.

But, on the bright side, students are taking their studies more seriously. High tuition costs and less disposable income for drinking lead to more healthy brain cells and better liver function. It will result in graduates finally knowing how to think critically, solve challenging problems, and possess important knowledge and skills that both they and employers want.

But seriously, the Lean teaching pedagogy infused throughout the curriculum could result in higher prices that students and payers accept because the value proposition has been substantially improved. Think about it: University leaders can chase higher enrollments (and compete on the basis of price), as everyone is doing, or fundamentally improve the value proposition.