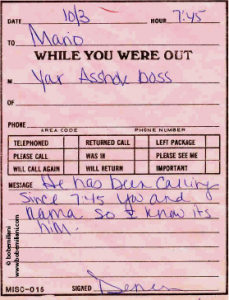 The image to the right is a telephone message given to me by my administrative aide some 30 years ago (remember those?). My boss was a difficult person at times. Nevertheless, I learned some important things from him and the scoldings he gave me. To be sure, I’ve had worse bosses since then. I learned from them too, but mainly what not to do rather than what to do.

Unfortunately, most bosses find a way to be an asshole because, in part, they don’t think or care about the effect that they have on other people. On the surface, it may seem as if they do little harm. You have to look more closely to see the physical and mental impact that bad bosses have on people, which can easily create unhealthy chronic stress environments. This causes workers a lot of worries. 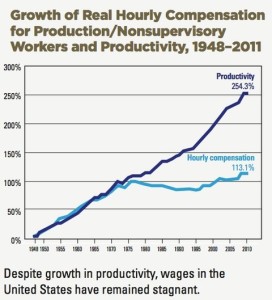 Harm to people can come about in other ways, usually slowly and over long periods of time, which have a unfavorable health impact. Among the big things that people worry about is losing their job and income growth. Layoffs due to outsourcing and offshoring have had a huge negative impact on millions of American workers. The image at right shows why people are correct to worry about income growth. For nearly 40 years, wages have been flat for hourly workers (same for salary workers making less than about $60,000 per year).

Reality dictates that we can never be worry-free. But bosses should not go out of their way to create worries for workers. Worries distract people and make it hard for them to focus on improving their work and innovation.

Others can become worried as well, such as suppliers, investors, communities, and customers.  When Toyota had their quality problems and big recalls in 2010, Akio Toyota said: “I would like to take this opportunity to apologize from the bottom of my heart for causing many of our customers concern after the recalls across several models in several regions.” He was sensitive to customers and their worries.

Lean leaders understand this better because of the “Respect for People” principle in Lean management, which contributes to achieving stable long-term growth and mutual prosperity. Every boss, it seems, should want that, but few actually do – particularly the part about mutual prosperity. Perhaps that will change in the future as baby boomer leaders retire and are replaced by a younger generation who saw what they did to their parents.

Origins of Lean Management in America