Long ago when I first started teaching Lean leadership to M.B.A. students, I defined Lean management as:

“A zero-sum management practice focused on maximizing value for shareholders.”

What a remarkable difference there is between win-win Lean management and win-lose conventional management. The former being a significant challenge worthy of the CEOs position, pay, and responsibilities, while the latter is unsophisticated and effortless.

Leaders skilled in conventional management think they respect people and say things like: “That’s a given; we do it every day” or “You can’t be in business today without respecting people.” These words show little actual thought goes into understanding what is respect and who are people. The context is employees and respect is limited fundamentals such as courtesy, listening, and perhaps developing people – none of which is done well. Blame and many other forms of disrespect to employees and other stakeholders remain widespread. Their definition of respecting people is simplistic and weak, and it is largely ineffective because zero-sum management practice obstructs one’s ability to respect people. 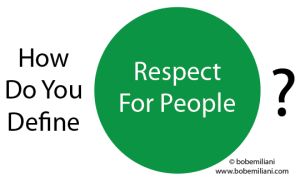 My work has focused on Lean leadership and the “Respect for People” principle for more than 20 years. However, I never thought to provide a definition to my students or anyone else. Why? It is because “Respect for People” defies simple definition. Anyone who has a lot of experience with Lean management (as defined above) knows that. A simple definition cannot fully capture its meaning. However, one does have to understand that “People” is not just employees. It is all stakeholders – employees, suppliers, customers, investors, communities, and competitors – and hence humanity.

While a simple definition, such as that found in a dictionary, is what people want – customer demand – providing it will do more harm than good. Defining “Respect for People” fools people into thinking they know what it means. Similarly, defining the “Continuous Improvement” principle will lead to trouble. Simple definitions allow people to become lazy and avoid thinking for themselves.

So, instead of providing my students with a simple definition, I teach them who “People” are (stakeholders) and the many many ways in which the “Respect for People” principle functions. By doing this, I provide them with broad knowledge of how the principle applies to different stakeholders under different conditions. They are taught to comprehend the “Respect for People” principle within the far-reaching and ever-changing context of the real world, not within the limiting framework of a few words or a paragraph printed on a page.

But, you say: “What about Toyota? Didn’t they define what ‘Respect for People’ means when they published ‘The Toyota Way 2001‘?”

Toyota did not define “Respect for People” in a simple linear way, a few words or paragraph on a page. Instead, they provided boundaries that delineate a space or volume of how the “Respect for People” principle functions under different conditions. They did this by providing explanations of key concepts combined with many historical examples of Toyota managers who successfully put the principle into actual practice. Therefore, The Toyota Way and its principles, “Continuous Improvement” and “Respect for People,” are positioned as something that is not static but must instead evolve and develop over time.

The “Respect for People” principle is comprehended only through daily practice, on the job, and in combination with the “Continuous Improvement” principle. It requires years of thought to understand well. And, it can never be completely comprehended.

So, when you see or hear the “Respect for People” principle defined in a few words or paragraph, you are wise to ignore it (for example, when “People” is presented narrowly as only employees) or recognize it as just one of many many ways to understand “Respect for People.” As with anything pertaining to Lean management, it is best to think for yourself.