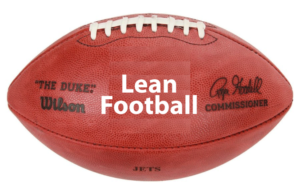 What would happen if Lean thinking were applied to American football?

American football is in trouble. The league Commissioner and team owners know there must be changes made to the game to assure a future pipeline of skilled players and to grow its fan base for generations to come. But League officials and team owners are unsure of what to do and cannot agree on what changes to make. So, to help them think “out of the box,” the Commissioner hires a Lean consultant to appraise their situation and recommend changes to implement.

A cursory analysis by the Lean consultant reveals the following:

The Lean consultant determines that the game has far too much idle time, that players are too large and strong, and that most players are not actually needed given that only a few perform that value-added work of scoring points. The following recommendations for improvement to American football are made to the Commissioner and team owners:

In Lean football, there are three players on field instead of 11. On offense, the quarterback has the combined role of center, passer, and running back. There is one blocker/running back, and one running back/receiver. On defense, there is one lineman, one middle linebacker, and one safety. There are no goal posts, and hence no need for an extra point/field goal kicker. There is no punter. There are no special teams.

Because only six players are on the field, the size of the field can be reduced from 120×53.33 yards to 65×25 yards. The scoring area on the field consists of two five-yard deep end zones (instead of 10 yards). Successfully advancing the ball into the end zone generates three points. Two-point and one-point scoring zones are added to various locations on the playing field to generate more scoring opportunities. There are two downs to advance the ball 15 yards instead of four downs to advance the ball 10 yards.

These changes would result is a faster game, a higher scoring game, and a game with fewer injuries, a future pipeline of skilled players, access to a wider pool athletes, and larger fan base. A smaller stadium, fewer assistant coaches, a smaller staff, fewer players, fewer referees, smaller airplane, less equipment, lower medical bills, etc., result in lower ticket prices. Yet these changes result in higher gross margins for team owners because 32 games can be played in a season versus only 16 games. Lower initial investment means more teams can be established in more cities across the United States — utilizing the made available from the old 53-man roster — creating exciting regional rivalries.

One or two out of the 32 owners think Lean football is a good idea, but the Commissioner and team owners hate these improvements, mainly because the status quo is upset. They say “no thank you” to the Lean consultant and bid them farewell. It turn out that all that the team owners really wanted was a better helmet and a few rule changes. That’s what they thought “thinking outside the box” meant.

These changes could not happen because the interests of all existing stakeholders – the league office, owners, players, coaches and staff, referees, fans, stadium owners, advertisers, television and cable networks, politicians, etc. — would be impinged upon in many ways that are bad for business.

In addition, the old football heroes, old playing records, and traditions would become irrelevant if Lean football were to happen. The game of football, its meaning, and its relevance to owners, players, fans, and society would be greatly diminished or lost over time.

I made this example of Lean football to dramatize the effect that Lean transformation has on the vested interests of owners and other stakeholders of any manufacturing or service business. It makes clear that the interests of business leaders (owners), workers (players), and others are greatly upset by such changes, despite the many real and potential benefits. The scope of change is too great for conservative-minded owners, and so other stakeholders are forced to go along with the owners’ decision to maintain the status quo. After all, it is not within the remit of most presidents and CEOs to make unfamiliar changes to the business that directly impact their interests.

So, continuing one’s efforts to find better ways to “sell” Lean to business leaders, or improve the many other methods used to promote Lean (books, training, conferences, etc.), are not likely to advance Lean beyond its present position as a niche management practice. That line of thinking is far too narrow and has proven itself to be of limited success. The path forward is in the development of new, breakthrough ideas.