A substantial portion of the difficulty appears to lie with influential people who for many years ignored or severely discounted the “Respect for People” principle and the critical role it plays in the proper functioning of Lean management. This can be attributed to one or more of the following: a lack of first-hand experience with Lean management practice, incomplete or biased research, simple misunderstandings, or selective presentation of research findings. Whatever the cause, opportunities to help people correctly comprehend Lean management were lost for nearly 25 years – a critical period of time for American business and for American workers.

In December 2007, James P. Womack wrote an e-letter titled, “Respect for People,” which was also published in January 2008 in Reliable Plant under the title “The Toyota concept of ‘respect for people” and subsequently published in the book Gemba Walks in 2011). In these he said:

That bit of a sentence shows a stunning lack of awareness of the “Respect for People” principle in Lean management and the process for creating The Toyota Way 2001 document. Careful study the history of Toyota Motor Corporation, Toyota management’s mindset and practices, and the evolution of Toyota’s production system (and of progressive management itself) would reveal that “Respect for People” was not a recent addition to The Toyota Way. 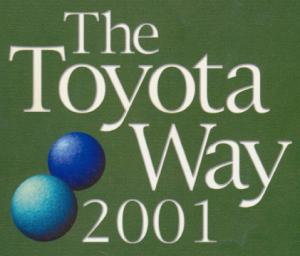 Toyota describes the creation of “The Toyota Way 2001” document as follows (this information has been on Toyota’s web site for several years):

“…in October 1998, TMC established the Toyota Way Compilation Project Secretariat inside the BR Global Human Resources Department and set out to compile the Toyota Way. The Toyota Way gathered together the management philosophy and values that had been passed on as implicit knowledge and made them available in an easy-to-understand systematic and visual manner…

For this project, the philosophies and values of predecessors and forbearers were extracted from the Toyoda Precepts and the Guiding Principles at Toyota and, following many rounds of consultation with TMC executives, were compiled as the Toyota Way 2001 in April 2001. This document explained the five key concepts of ‘Challenge’, ‘Kaizen(continuous improvement)’, ‘Genchi Genbutsu (go to the source to find the facts)’, ‘Respect’, and ‘Teamwork’, under the two main principles of ‘Continuous Improvement’ and ‘Respect for People’…”

The Toyota Way was around for a long time and finally codified in printed form in April 2001. The existence of the “Respect for People” principle was no secret. It could be found in the writings and speeches of former executives, in their decision-making, and in the early accounts and studies of Toyota’s production system. For example:

“Toyota firmly believes that making up a system where the capable Japanese workers can actively participate in running and improving their workshops and be able to fully display their capabilities would be foundation of human respect environment of the highest order.”

“…although cost-reduction is the system’s most important goal, it must achieve three other sub-goals in order to achieve its primary objective. They include:

1. Quantity control, which enables the system to adapt to daily and monthly fluctuations in demand in terms of quantities and variety;
2. Quality assurance, which assures that each process will supply only good units to subsequent processes;
3. Respect-for-humanity, which must be cultivated while the system utilizes the human resources to obtain its cost objectives.

It should be emphasized here that these three goals cannot exist independently or be achieved independently without influencing each other or the primary goal of cost reduction. It is a special feature of the Toyota production system that the primary goal cannot be achieved without realization of the subgoals and vice versa. All goals are outputs of the same system; with productivity as the ultimate purpose and guiding concept, the Toyota production system strives to realize each of the goals for which it has been designed.”

“The most important objective of the Toyota system has been to increase production efficiency by constantly and thoroughly eliminating waste. This concept, and the equally important respect for humanity that has passed down from the venerable Toyoda Sakichi (1867-1930), founder of the company and master of inventions, to his son Toyoda Kiichiro (1894-1952), Toyota Motor Company’s first president and father of the Japanese passenger car, are the foundation of the Toyota production system.” (italics added).

In an interview in 2007, Fujio Cho, former President and Chairman of Toyota Motor Corporation said:

“Our way of thinking is very difficult to copy or even to understand.”

That’s true, but it’s even harder to understand if a critically important principle is ignored for more than two decades. Again, quoting Fujio Cho:

“The philosophy that makes [continuous improvement] possible is ‘Respect for People’.“

The book, Lean Thinking, by James P. Womack and Daniel T. Jones, is subtitled Banish Waste and Create Wealth in Your Corporation. Perhaps Daniel T. Jones, an economist, was more influential in deciding how Lean should be presented to the public, as a corporate wealth creator for owners and investors, than how James P. Womack, a political scientist, may have wanted to present Lean. Maybe their literary agent or book editor favored the wealth creation positioning in order to sell books to a management audience. It matters little now. 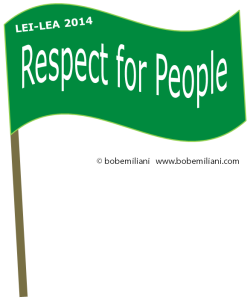 What we know is the consequence of that positioning and of leaving out the “Respect for People” principle: large numbers of people were laid off as a result of Lean in the quest for corporate wealth creation. That zero-sum outcome is entirely predictable given the 100-plus year history of progressive management (see REAL LEAN Volumes One and Two). Ignoring the “Respect for People” principle could not have come at a worse time. This was a huge mistake and also supremely disrespectful of people. What happened to workers on the genba between 1990 and 2013 (and to their families, as well as suppliers and communities) was both repugnant and heartbreaking.

While one can always say “better late then never,” one can also say that a massive, multi-year effort is now needed to correct leaders’ understanding and practice of Lean management. Instead of starting in 2014, this effort could have begun in 2001 or much earlier, say, 1990, likely saving many jobs and much family heartache. Can business leaders’ understanding and practice of Lean now be corrected? Do they care? Is it too late?

Note: The title Lean Thinking and subtitle Banish Waste and Create Wealth in Your Corporation suggests that the objective of Lean production is to create corporate wealth. According to Taiichi Ohno, the purpose of Toyota’s production system (inclusive of The Toyota Way) was “increased productivity and reduced costs.” Wealth creation was a by-product, not the objective.