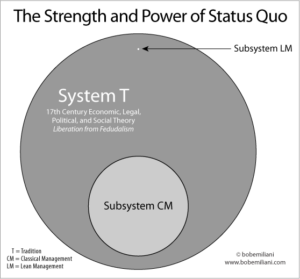 The image above tells the story accurately and succinctly. Lean management exists in a system that has been designed to preserve the status quo (conserve obsolescence), and so it must constantly struggle to exist, let alone survive. An important aspect of preserving the status quo is for its guardians to avoid disruption and assure that unity is maintained, which Lean obviously threatens. What is the status quo if not the avoidance of disruption and disunity? And if one does nothing to upset the status quo, then one can essentially lead a respectable and blameless life.

17th century economic, legal, political, and social theory was radical for its time. The great moral philosophers and political economists were making the case to end feudalism (and mercantilism), and they succeeded. But these then-liberal ideas have, over three centuries, ossified into traditions (status quo) that Lean management has been forced to fight against for more than three decades.

System T is the system of handicraft-era tradition associated with economics, law, politics, society, philosophy, and business. System T contains Subsystem CM, classical management which emerged during the machine age and as corporations became the dominant business entity. Within System T lies a tiny dot where Lean management resides, Subsystem LM. Subsystem LM is surrounded in all directions by System T and the overwhelming influences of Subsystem CM. The modern System LM is forced to find ways to prosper in the archaic world of System T.

So when people ask these questions:

the questions they are really asking are: 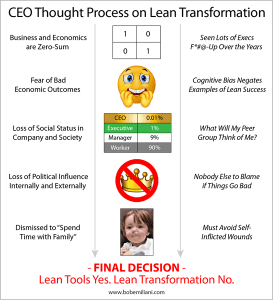 To give you an example of the strength of System T, and Subsystem CM, let’s examine the thought process that many CEOs go through when considering embarking on a Lean transformation, as shown in the image. While they may say otherwise, most CEOs understand economics and modern business practice to be zero-sum. You either win or you lose, outcomes are good or bad; there is no in between. So, over the years, the CEOs have seen many leaders who failed because they did not do what was necessary for the company to win, regardless of whatever bad effects other stakeholders experience.

Throughout their career they witnessed many managers and executives who failed due to bad financial results, and so they fear a bad economic outcomes that might occur on their watch. Concurrently, they invoke cognitive biases that negate examples of successful Lean transformation, and thus see little reason to adopt Lean management — a new management practice that they construe as likely to fail.

They are also extremely concerned about the loss of social status and political influence, especially within the company but also external to it. And CEOs that fail to deliver the required economic outcomes are dismissed and suffer the indignity of public shaming: “spend time with family.”

At the end of this thought process, CEOs come to what they see as a very good decision: Yes to Lean tools, in furtherance of the desired economic outcomes, and No to Lean transformation because comprehensive change in leadership and management risks achieving the desired economic outcomes. They judge this to be a sound pragmatic decision in light of circumstances — both in relation to their personal well-being and survival as CEO as well as the fact that they must contend with System T and Subsystem CM which are formidable negative forces relative to the goal of Lean transformation. Most CEOs don’t want to deal with those negative forces, disruption, disunity, or personal risks brought on by Subsystem LM.

Given this situation, how can we make progress? There are myriad details that one must understand to effectively answer the questions posed above and to identify countermeasures. And there are myriad details to understand CEOs thought process on declining to adopt Lean management in full form (versus its parts, the tools). The more you know about System T — and especially the institution of leadership in Subsystem CM — the better the chances for Lean’s survival in companies and as a management practice. Click here to learn more about the economic, legal, political, social, philosophical, and business traditions that Lean and its promoters have long been fighting against — and losing.