The Trouble With Tenure

The Wisconsin Policy Research Institute recently published a report titled: “The Trouble with Tenure” (February 2016). Click here to view the report. In the Executive Summary, page 5, the authors present an interesting and very challenging recommendation:

“…the Board of Regents… should also undertake a systemic review of whether tenure is appropriate and necessary on all campuses and at the Extension. As part of this review, the regents should direct individual campuses with varying missions to clearly articulate why each department benefits — or doesn’t — from having tenured or tenure-track employees rather than instructional staff operating on contracts. Similarly, each time a person is considered for tenure, chancellors should articulate why the department and university will benefit from having a tenured employee rather than a member of the instructional staff operating on a contract that assures academic freedom. Specific reference should be made to the mission of the individual campus university, and how the candidate is expected to contribute to the various facets of the mission.”

I applied this recommendation to my institution, and here is the result (click image to enlarge): 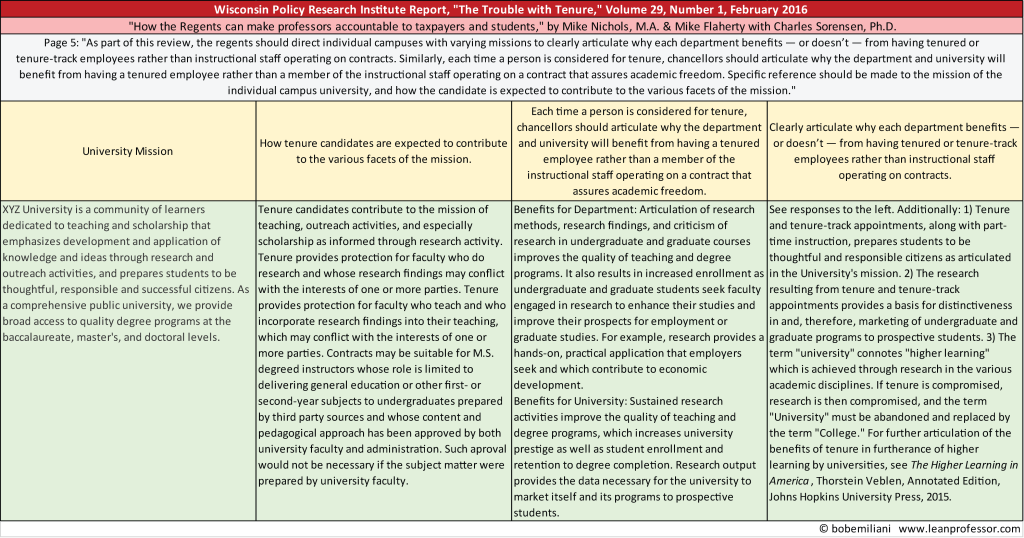 Why is tenure a necessary aspect of higher education and of higher learning? Imagine if a faculty member at a university were to undertake a carefully constructed research project whose data indicated that the above recommendation was the result of various biases, and that, as a result, the report and its recommendations were unreliable for use in executive decision-making. And, what if the authors of the report making said recommendation judged the research to be a personal attack and which damaged their credibility, rather than a dispassionate research project in search of the simple truth? They could complain to the university president and demand that the professor be fired.

In the absence of tenure, the professor could be dismissed as a result of their research. The practical consequence is that the simple truth behind the important question of how professors could be made accountable to taxpayers and students would be undiscovered, and would instead remain within the realm of subjective opinion informed by potentially faulty political (or other) ideology.

Well-designed research might instead reveal uncomfortable truths regarding administrative labor costs, the cost of NCAA athletic programs, and other costly dissipations that do not contribute to the university’s mission, and which therefore indicate that the principal accountability to taxpayers and students lies elsewhere.

Tenure, therefore, might be much less trouble than is imagined. It might also reveal that perceived need for universities to become more flexible, nimble and responsive is not actually necessary.