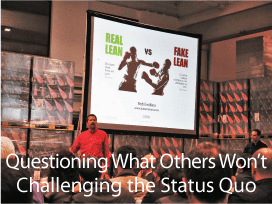 In recent years I have received condemnation and censure for blog posts that I have written that criticize “Lean,” the MIT research that resulted in “Lean,” the work of James P. Womack and Daniel T. Jones, and the work of the Lean Enterprise Institute and the Lean Enterprise Academy. My motives have been questioned as well. Interestingly, I have received little or no criticism based on the merits of my arguments.

My criticism of Womack and Jones’ work is the apparent problem. But when asked, people say the actual problem is the tone of my writing which can seem as if I am making personal attacks. But, I am not. The tone of my writing is tough because people’s lives and livelihoods are at stake – for example, workers laid off due to Fake Lean, speeding people up, etc. A tough tone is nothing compared to the real-life pain that so many workers have had to endure since Lean emerged in 1988.

I went back and read all of my blog posts that criticized Womack and Jones’ work. Below are the relevant blog posts (updated 28 August 2016):

Criticism is healthy for Lean because it makes people think and improve their practice of Lean, and it is consistent with “Continuous Improvement and “Respect for People.” More people should do it. The criticisms in my blog posts and other works are written from a scholarly perspective. Scholarly criticism is critical thinking and must never be confused with blame. In Lean, critical thinking is called asking “Why?,” and we are taught to ask “Why?” to always challenge conventions and preconceptions. That’s what we do, isn’t it?

Lean emerged from scholarly work performed at Massachusetts Institute of Technology. Anyone whose name is associated with a scholarly work (e.g. Womack and Jones) is subject to scholarly criticism by scholars and others. Criticism can have the appearance of ad hominem attacks, but they are not that at all. People who present themselves as scholars and who are also leaders in a given field are, naturally, targets for close scrutiny of their work, and criticism of their work will necessarily be associated with their name. There is no avoiding that. Arguing the merits of someone’s work necessarily requires the identification of those who did the work.

Criticism, by its nature, cannot be politically correct, because that would render it useless – as in, everyone’s facts and opinions are correct, which is nonsense. Criticism is a value-laden activity for moving a field of knowledge forward because it helps people recognize problems, think, and prompt them to do research and explore new ideas.

My father was a renowned scientist, and I know a lot about his work. The written criticisms that the researchers in his field leveled at each other were very aggressive in regard to theory, method, and interpretation of experiment results. They were respectful, but not necessarily polite. And they never engaged in ad hominem attacks. Their criticism was mostly based on facts, but opinions also informed their criticisms of each other’s work. That’s how science evolves in the search for truth.

Disagreement was not seen as something to avoid or an excuse to think less of someone. Criticism was welcomed as an important and worthwhile challenge. “Challenge,” you will recall, is an element of The Toyota Way 2001. Comprehending criticism and defending one’s views was seen as an opportunity to learn more, not less. Apparently, today, that is seen as “old school.”

The scientists in my father’s field were good personal friends with shared interests and a who accepted the great responsibility to advance their field of science, which they took very seriously. Service to the science stood far above personal gain. They met at major conferences a few times a year, gave talks, withstood questions and criticism face-to-face. When that was over, they went to the bar for a few drinks. After that, dined together, and then drank more beer until late into the night.

They were inclusive and invited the younger scientists to join them whenever possible, and usually paid for their meals and drinks. They would visit each other’s university labs, give lectures to students, and dine in each other’s homes in the evening. There was some shop talk, but mostly it was eating, drinking, telling jokes, and recounting funny stories until midnight or later. Sadly, these important aspects seem to be missing among the leading figures of the Lean community.

In my view, Womack and Jones’ work, and that of other MIT researchers, has many serious shortcomings – which perhaps you can ignore but a scholar cannot. They missed several key things that have proven to be very important in the practical application of Lean (e.g. kaizen, the existence of Fake Lean, Lean failures, and so on). While that is hindsight, it is still fair to criticize their work. For example, the work of Adam Smith is criticized to this day and will be in the future.

I think something for which they can be criticized for, as I have pointed out, is failing to adjust, correct, or improve their work when evidence – primarily coming from others – presents itself. Womack and LEI and Jones and LEA have been slow to do this or, in some cases, (apparently) unwilling. The lack of responsiveness does not serve the community that depends on them or their customers.

Advancing a field of study, whether its theoretical or practical aspects, is difficult. People are generally not receptive to the “odd views” that invariably inform criticism. At times, it can appear to some as distasteful or even ugly. And it is difficult to take criticism. But it is not rude, and disagreement should be welcomed as essential to the advancement of Lean.

Lean people should welcome criticism as they are supposed to be exceptional critical thinkers and problem-solvers, comfortable speaking truth to power. But, the typical reaction is to take criticism as a personal attack, ignore criticism, and blindly accept the conventions and preconceptions associated with Lean. That is an enormous blind spot that limits people’s ability to continuously improve and evolve their knowledge and practice of Lean. By doing so they opt-out of advancing the thinking and practice of Lean management, and fail to honor the principles, “Continuous Improvement and “Respect for People.”

Criticism informs people about problems. It is necessary, even fundamental to human existence, as we seek to improve our condition. You can’t improve if you don’t know about problems.

Don’t think all I do is criticize. Hundreds of positive and practical suggestion for improvement are contained in my 16 books, 25+ journal papers, and 200 other blog posts.