John Seddon has made an amazing discovery: Lean is failing! 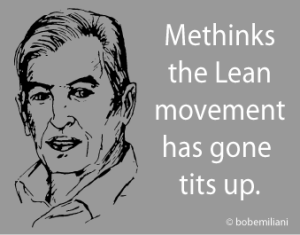 In a paper much anticipated by few, “An exploration into the failure of Lean,” Seddon and co-author Brendan O’Donovan “…show that the ‘Lean’ (Womack and Jones 1996) movement is based on a flawed interpretation of innovations” created by Toyota beginning in the 1950s. They argue that Lean “is a busted flush.” The paper eloquently states the obvious on this point and many others.

Seddon and O’Donovan argue that “…lean was simply overlaid onto conventional Western management ideas…” Brilliant! They came to this insightful conclusion without using any Lean tools such as an A3 report! Not a 5 Whys in sight.

They take James P. Womack and Daniel T. Jones to task for making a grave error in codifying Taiichi Ohno’s innovative production system (specify value, identify the value stream, flow, pull, and perfection), which, in turn, resulted in Lean programs that drive change though tools-based “improvement projects” rather than by studying the system. According to Seddon and O’Donovan, “Taiichi Ohno’s original vision for the TPS was that it would be a system designed to produce cars at the rate of demand.”

No, it was cost reduction.

To understand Ohno’s intent, Seddon and O’Donovan should have also carefully read and cited Ohno’s two other books: Workplace Management and Just-In-Time for Today and Tomorrow. It would be better still if they had spoken to people who learned directly from Ohno-san such as Chihiro Nakao. Mr. Nakao’s original (1973) internal document describing TPS is titled: “Toyota Production System for Cost Reduction.” Seddon and O’Donovan’s error destroys the premise of their paper.

The first and still most accurate codification of TPS was made by Yasuhiro Monden in his 1983 book, Toyota Production System: Practical Approach to Production Management. Monden’s description of TPS was the result of his conversation with Ohno-san. Read this blog post to learn why cost reduction was the Toyota Production System’s most important goal. Unfortunately, Seddon and O’Donovan, as well as Womack and Jones, ignored Monden’s excellent work. But rest assured, any codification of TPS in the hands of incurious leaders will lead to poor outcomes.

What most people still struggle with is that in TPS, cost reduction (via kaizen) is understood to result in simultaneous improvement in all parameters such as productivity, quality, lead-time, customer satisfaction, market share, respect for humanity, profits, and so on. In TPS, it does not make sense to reduce costs and simultaneously introduce trade-offs that negatively affect other parameters or people. This is not a “Western researcher” problem or a “codification” problem. It is a human cognition and human behavior problem.

Seddon and O’Donovan’s final words are:

“…lean has been an impediment to what remains a major opportunity to re-think the purposes and practices of management, as Ohno exemplified in the TPS. It is, therefore, time to read the last rites to the lean movement.”

People committed to Lean are upset when it fails and people are harmed. But, failure is how we learn, and often it takes longer to learn than anyone would like. Seddon and O’Donovan seem to not understand that TPS was created through trial-and-error, not by studying as academics or consultants are known to do. Lean management, as well as the Lean movement, must be created by trial-and-error. Unfortunately, there has been too little trial-and-error for both.

As Nakao-san says: “Failure is not failure. It is a step towards improvement.” We just need need to make many more and faster steps toward improvement.