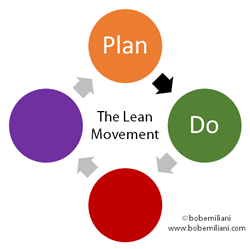 Nearly 30 years after the start of the Lean movement, there is widespread agreement that things have not gone according to plan. Of course, there have been some notable successes (particularly those who worked with Shingijutsu), yet they are far fewer in number than anyone expected given the wide-ranging benefits of Lean management to all stakeholders. I have previously commented on the strategic errors that were made, but I’d like to expand upon that here.

This is not criticism resulting from hindsight – far from it. What happened could be seen and understood in real-time or after short delays of one to three years. These are the miscalculations that I observed:

It is apparent that the Lean movement did the Plan-Do, but it did not do the Check-Act. The lack of timely problem recognition and corrective action stands out, in my view, as a major error that compounded the impacts of these miscalculations.

As a result of strategic errors and miscalculations, there exists deeply-rooted negative associations of Lean to things like layoffs, (Fake) Taylorism, and bureaucratic (check-the-box) Lean. We should expect Lean to have limited appeal going forward, thus making our job a little harder.

These are perils of outsourcing our thinking to establishment leaders. Instead, we must think for ourselves and figure out what to do, with guidance from the originals. In my view, the way forward includes a renewed focus on kaizen, flow, and Lean leadership. Lean management is an innovation of strategic significance, which will, in time, become more widely embraced because it can help humanity. So we must face our challenges and persevere.